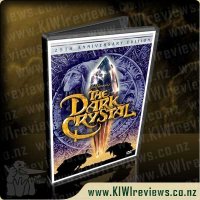 In another time, THE DARK CRYSTAL - a source of Balance and Truth in the Universe - was shattered, dividing the world into two factions: the wicked Skeksis and the peaceful Mystics. Now, as the convergence of the three suns approaches, the Crystal must be healed, or darkness will reign forever.

The task falls upon Jen - the last of his race - to fulfill the prophecy that a Gelfling will return the missing shard to the crystal and destroy the Skeksis' evil empire. But will young Jen's courage be any match for the unknown dangers that await him?

When the Dark Crystal came out, I don't think we were allowed to go and see it at the theatre. We saw the making of show on TV and Mum deemed it too scary, though we were allowed the movie book. So later when I purchased a box set of this and Labyrinth, I finally got to see what all the fuss is about. Dark Crystal is quite a dark movie, and for it's time it probably seemed too dark and foreboding for Mum.

You have the beautiful Mystics, who are a bit like druid hippies. They sing to each other in this "ahhhh" tone, but you could just imagine it being "ommm". And then the evil Skeksis who are more like vultures. They have a pecking order and feel nothing for each other let alone the other races and creatures of their world. They almost reminded me of Snaffles in a Steven Cosgrove book, which was about a vulture-like creature who learns about emotion from a scruffy rabbit. The other vulture creatures laugh at Snaffles and call him names for wanting to understanding feelings and he is beaten down for it.

Unlike Labyrinth, there are no life action actors, its all puppets. I think that works well though, because as a viewer you can kind of feel safer. Though to be fair, you relate to the puppets quite a bit as well. I certainly felt plenty of empathy for Jen on his journey and there were a few scenes where I knew my younger self would have been terrified. Henson manages to fill the viewer with despair, where the adventure seems to be totally lost and hopeless. But there are triumphs and victories too. I watched this with my daughter recently, but she wasn't as interested in it as she has been in other movies I have shared with her. Return to Oz and Labyrinth seem to have won her over compared to this one.

This is one of those movies that stands the test of time. When I watched it as a child this was one of my favourite movies, and I loved to watch it over and over. My kids now watch this, 20 years later, and they like it just as much as I did when I was their age.

The world was once a peaceful place until the Dark Crystal was shattered, separating the world into two races, the hateful Skeksis' and the loving Mystics. The Skeksis' do not want their way of life changed and wish to stop anything that may put the world back into order. Jen, the last of his kind, is entrusted with the task of completing the Dark crystal before it is too late.

The imagery is one that lasts, even in today's world with all our high-tech devices and special effects. In fact, to me this helps The Dark Crystal to keep it's charm and make it such a loveable film. I own this, as it was my husband loves this film even more than I do.

Score: 9.3
Product reviews for listing 5260: A Case of You
Directed by Kat Coiro

Young writer Sam (Justin Long - He's Just Not That Into You) has a crush on Birdie (Evan Rachel Wood - The Wrestler), the cute and quirky barista at his local coffee shop. When his conventional attempts to woo her crash and burn, he takes his efforts online, creating an Internet profile embellished with all of the details that would make him Birdie's dream guy: ballroom dancing, rock climbing - a seemingly endless, escalating series of ... more...