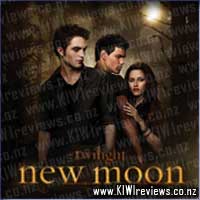 The second installment of Stephenie Meyers phenomenally successful Twilight series, the romance between mortafeefl and vampire soars to a new level as Bella Swan (Kristen Stewart) delves deeper into the mysteries of the supernatural world she yearns to become part of, only to find herself in greater peril than ever before.

Following Bella's ill-fated 18th birthday party, Edward Cullen (Robert Pattinson) and his family abandon the town of Forks, Washington, in an effort to protect her from the dangers inherent in their world. As the heartbroken Bella sleepwalks through her senior year of high school, numb and alone, she discovers Edwards image comes to her whenever she puts herself in jeopardy. Her desire to be with him at any cost leads her to take greater and greater risks.

With the help of her childhood friend Jacob Black (Taylor Lautner), Bella refurbishes an old motorbike to carry her on her adventures. Bella's frozen heart is gradually thawed by her budding relationship with Jacob, a member of the mysterious Quileute tribe, who has a supernatural secret of his own.

When a chance encounter brings Bella face to face with a former nemesis, only the intervention of a pack of supernaturally large wolves saves her from a grisly fate, and the encounter makes it frighteningly clear that Bella is still in grave danger. In a race against the clock, Bella learns the secret of the Quileutes and Edward's true motivation for leaving her. She also faces the prospect of a potentially deadly reunion with her beloved that is a far cry from the one she'd hoped for. With more of the passion, action and suspense that made TWILIGHT a worldwide phenomenon, The Twilight Saga: New Moon is a spellbinding follow-up to the box office hit.

To be honest I was unsure what everyone saw in Twilight. I had watched the first one and thought man this is boring its so slow and I just didn't get it. Then New Moon played at the movies and the song 'Meet me on the Equinox' was everywhere showing you clips of the movie and I started paying notice again. Twilight came on sky and I re-watched it and something happened, I was bitten by the Twilight bug and I officially became a Twihard.

I waited until this showed on sky and I loved it. Edward and Bella had broken up and in walked Jacob - I was always Team Edward, but enjoyed watching the Werewolves and seeing what they are capable of. It was great seeing the triangle evolve and everyone fighting for Bella's attention but I was never concerned that Jacob would win.

It was a little bit to much 'teenage emotions' for a while but when she got over her funk and started living again and enjoying life it improves. Although it is definitly better when the vampires return. Hell have no furry like a woman scorned. A lot of people said this was slow and boring, I don't think so. It was painting a picture of Bellas and Edwards realisation that they can not survive without each other. It also introduces the werewolves and shows the love/hate relationship they really possess.

I'm going to bring the score on this one up a bit because I absolutely loved this movie and all the other movies in the series. I never read the books so the movies were my first look in to the twilight saga. I probably wouldn't of got into them but my 11 year old daughter loved it and so I had to go to every movie with her so got gripped on the story myself.

It is such a great love story with Edward doing everything he can to protect Bella and Bella doing everything she can to be with him even if it means she puts herself in dangers way. The graphics in the movie are fantastic with the wolves seeming like they are jumping through the screen out at you. So the wolves are not overly realistic looking as they look a lot larger and more ferocious than real wolves but they have been done really well so they give that element of fear.

This isn't the best movie in the series with my favourite being Breaking Dawn Part but it is still a great movie and I would definitely watch it again we own most of the movies on DVD and my daughter will quite often put them on as she never gets sick of them.

I have to admit, because I am such a fan of the books, I am a bit hard on reviewing the movies. It is really a hard task to manufacture the same feeling that the book has and turn it into a movie. There were many scenes that I missed from the book, and at times I didn't get the same feeling as I did when I read the book.

However if you have never read the books (and why wouldn't you read them???), you certainly won't be looking for details missing from the story line. New Moon was one of the saddest movies I watched - how could Edward leave Bella???!!! It was heart-wrenching to watch Bella trying to cope with the situation and jeopardising her own life (and sanity) for a chance to get closer with him.

At the same time Bella and Jacob become close and you feel a close bond between the characters. I'm not a huge fan of this movie, but if you are a TWILIGHT fanatic like me, you're bound to watch it regardless!

Moving on from the smash hit 'Twilight' and starring an incrediibly buffed up Taylor Lautner as Jacob (the part time Werewolf), this second installment was very different in flavour to the first. Directed by a man this time around (Chris Weitz), it seemed an unabashed flesh fest for the ladies and... well... I'm not sure what the attraction was for the gentlemen, since watching one's girlfriend drool over a hotter and invariably younger man is surely a little emasculating. Still...

This was definitely Jacob's moment to shine. I never liked him much in the books, but watching this made me a convert. I know I am going to get shot for saying it, but I swear Robert Pattinson (Edward) looked constipated for pretty much the entire film. I got to the end and found myself genuinely puzzled by the loss of chemistry between him and Bella. It had been there in the last film... but suddenly all their scenes together seemed forced. A little bit like the music. Another let down, given how well Carter Burwell had scored the first film. His successor, Alexandre Desplat, did little to impress.

I did find it amusing that day could turn to night in the forest in the amount of time it took Bella to walk from one side of the screen to the other, but I suppose I shouldn't complain. There were plenty of pretty effects to keep me distracted - in the ocean, when she disturbs Edwards image and it turns to ink, or when the vampires are fighting each other in Venice...

Alice, as always, was great (my favourite character). Jacob won my personal award for fastest time to take off a t-shirt in cinematic history. Edward and Bella running through the forest 'Sound of Music' style made me laugh so hard I cried. So all in all, it was an okay movie that certainly improved on the depressing tone of the book. I am looking forward to later installments, especially Breaking Dawn, but I don't know if I will be able to sit through another movie and a half worth of broken-hearted Jacob in order to get there...

In Finding Neverland, Johnny Depp stars as J M Barrie, the author of the classic story, Peter Pan. Set in London in 1904, this is a fictional account of the writer's creative journey to bring his classic to life. Barrie's encounter with a recently widowed mother (Kate Winslet) and her four sons becomes his stimulus for the story.

He is drawn to the mother and her boys whom he entertains ... more...