Zirka Circus - Out of This World 2013 review 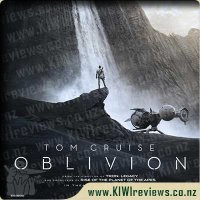 Disclosure StatementFULL DISCLOSURE: A number of units of this product have, at some time, been supplied to KIWIreviews by the company for the purposes of unbiased, independent reviews. No fee was accepted by KIWIreviews or the reviewers themselves - these are genuine, unpaid consumer reviews.
Available:
in cinemas from 11th April 2013

Living in and patrolling the breathtaking skies from thousands of feet above, his soaring existence is brought crashing down when he rescues a beautiful stranger from a downed spacecraft. Her arrival triggers a chain of events that forces him to question everything he knows and puts the fate of humanity in his hands.

Oblivion is something of a real-life version of Disney's "Wall-E", or another version of the classic "Logan's Run". Based around Tom Cruise's character monitoring a certain sector of a planet, restricted by 'radioactive areas', tasked with protecting large machinery that is collecting resources from rebel attacks, in the hopes of eventually returning home. With limited exposure to people, no knowledge of the world outside of his sector, his curiosity was clearly going to cause strife. Moving beyond his zone he discovered a veritable Eden of nature, that he came to love.

After a ship crashes, and he witnesses most of the survivors killed by his robotic support drones, his curiosity peaks. As the survivor that he has managed to protect turns out to be his wife. Next follows a long plotline of extenuating circumstances that lead him to join the rebels, and wind up trying to bring down the people he once worked for. Complications arise with the introduction of multiple clones, and it all becomes a bit too predictable.

The visual environment of an almost dead planet provided both a dreary and bland backdrop, which made the notion of not being aware of the other clones on the planet to become increasingly taxing. This film did nothing for me. It took me two attempts to watch the entire film, and whilst the plot had initially intrigued me enough to buy the DVD, I am now regretting that decision.

"60 years ago, the Scavs came and destroyed our moon. The resulting natural disasters wiped out most of us. The rest fought. We used nukes. We won the war, but lost the planet. We built the Tet, a temporary space station while we migrate out to Jupiter's moon Titan. Everyone else is there, waiting for us. We're the mop-up crew on drone repair."

Ok, those aren't the EXACT words spoken by the narrating character, Jack... but it's close enough to get the plot summary across. It seems quite a reasonable proposition, and indeed everything plays out along those lines well... but there are some hints that all is not quite as it should be. For me, one of the first hints - picked up on VERY early in the movie - was Vika's eyes. Either she spent 99.9% of the filming time high on Cocaine, or she had cosmetic contacts on... her pupils were pretty much at maximum dilation the whole time a camera was pointed at her. This gave me the first hint that the plot may not be quite so clear-cut.

After that, hints came thick and fast... and far from ruining the movie, the game became more "How close are my predictions..." and the movie only gained in enjoyment for me the more was revealed. The big plot-smasher really came after Jack has an unusual conversation, goes somewhere he shouldn't, and sees something that shocks him to his core... which really gave me the same kind of chills I got in a similar scenario in the movie "The Thirteenth Floor".

The special effects are, as is to be expected from a 130-million-dollar-budget film, seamless. I was highly impressed with the long-shots of Tom's character travelling through ruins of famous locations. It really did look like he was there, and the building and landmarks were indeed post-apocalyptic wreckage. It had a very similar look to the ending of the "Planet of the Ape" movie, with the tall parts poking out of the ground.

What really got me though, was the control desk used by the Vika character. A huge, multi-facet touchscreen that seamlessly curved up from the desk to a wallscreen. The software portayed on it had my poor wee geeky heart palpitating in delight and aching with desire to possess such a treat... and the funny thing is that the technology is already here! This allowed the movie to have a very "futuristic" feel, while still retaining a very "accessible" vibe as well.

Overall, though this movie will delight some, annoy others, and frustrate those who want to see it for the plot but are avoiding it because of the lead actor... it's actually well worth checking out. With a nice twist at the end that keeps the plot tidy, but still allows for a gooey moment that should at least allow the "unwilling girlfriends" taking their turn at the movie tag-along role to have an "Awwwwww" moment. I LOVED the tech, enjoyed the premise, and was even able to tolerate Cruise in yet another sci-fi role he wasn't the best pick for. Heck, even Jason Statham could have possibly done this one justice! My only real disappointment was that Morgan Freeman came in so late, and didn't have more on-screen time.

In Sahara, Dirk Pitt takes on the adventure of his life when he embarks on a treasure hunt through some of the most dangerous regions of North Africa.

Searching for what locals call "The Ship of Death", a long lost Civil War iron-clad battleship, Pitt and his wisecracking sidekick use their wits and clever heroics to help Doctor Eva ... more...