« About a Boy review 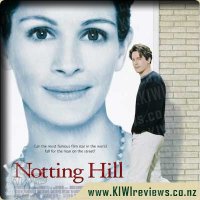 Every man's dream comes true for William Thacker, a successless Notting Hill bookstore owner, when Anna Scott, the world's most beautiful woman and best-liked actress, enters his shop. A little later, he still can't believe it himself, William runs into her again - this time spilling orange juice over her.

Anna accepts his offer to change in his nearby apartment, and thanks him with a kiss, which seems to surprise her even more than him. Eventually, Anna and William get to know each other better over the months, but being together with the world's most wanted woman is not easy - neither around your closest friends, nor in front of the all-devouring press.

I have seen Notting Hill so many times now I've lost count. Hugh Grant and Julia Roberts are two stars that draw me into watching a movie although I don't think either of them are particularly strong in this one. Grant's character is a bubbling nobody that meets and ends up dating a very famous actress (Roberts' character). Most of the movie is about how they struggle to have a normal life without her fame (the paparazzi and his friend's being starstruck) getting in the way.

One of the most memorable characters in this movie is the flatmate Spike. He has no social skills and provides the main characters with plenty of embarrassing moments and viewer with lots of moments where we don't know whether to cringe or laugh.

I would class this as a romantic comedy or chic-flick which I will most definitely watch next time it is on TV.

Notting Hill is one of my favourite movies. It follows a bit of a Hugh Grant format if you will. He plays the bumbling, overly shy but ruggedly handsome Englishman, alongside a gorgeous actress where love springs into being for the audience to swoon over. We have seen it before in Four Weddings and a Funeral, where it was just as adorable. After a while, the bumbling shy guy act does grate a bit. You are left to wonder if he is just playing himself or if he can actually act. Personally, I think he got type-cast for a bit, though later roles have allowed him to break away from that nice guy image.

The storyline of the movie is a bit like every average Joe's fantasy. To one day run into someone on your "top 5" list and have an actual chance at it. It is quite a romantic premise, and Julia Roberts is so adorably loveable in this as well. Again, she is always type cast into these roles of America's sweetheart. As for comedy, this movie has it too. For me the most fun character is Grant's Welsh flatmate Spike played by Rhys Ifans . He is wildly funny, and I love what a disaster he is. At the time of watching this at the movies I had a few male flatmates so some of the situations did ring with believability to me.

Lastly there is a cast of friends in the wings, who are all typical of English movies. They are well written, friendly and familiar. They are funny and annoying and supportive and exactly the types of friends you might hope for or even have in your life. That's why I love to support the English film industry. They really know how to write people and to portray something real and hopeful without it being a total "we are so great" fest. I saw this twice on the big screen and I own it on DVD, so I can say with certainty that I would pay to see it again.