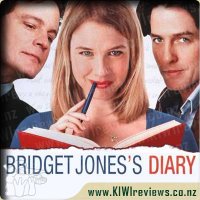 From the makers of Four Weddings and a Funeral and Notting Hill comes the screen adaptation of Helen Fielding`s international best seller starring Golden Globe winner Renee Zellweger (from Nurse Betty and Jerry Maguire) in the title role as the dynamic, irrepressible and outrageously original Bridget Jones. 32-year-old Bridget smokes too much, drinks too much and has a tendency to say whatever's on her mind. As a New Year`s resolution she decides it's time to take control of her life - and starts keeping a diary.

Before this movie came out, several of my friends were raving about Bridget Jones's Diary. They were all reading the novel. I didn't think it would be the sort of thing I would enjoy, so I didn't bother. However, the hype carried over into the media and suddenly we all got to hear about how Renee Zellweger was putting on a tonne of weight (whatever!) to play Bridget Jones in an upcoming movie. So of course we all went for a girl's movie night to see this movie when it came out.

I have to admit that as much as I wasn't looking forward to seeing it, I really enjoyed the movie. There was a lot more swearing in it than I was used to for the time the film came out. Maybe I just didn't notice the level of swearing in other films, but they seemed to drop the F bomb quite a bit. I liked Bridget Jones. She was a very real sort of character, very flawed but fun. You could imagine yourself in her shoes, and you could imagine her as a friend. She is pathetic in her blind obsession with Grant's character. But you understand as well. Despite everything she is much stronger than you first give her credit for too.

Hugh Grant plays a womaniser again here, but with much less redeeming qualities. He is just plain mean but still has some great funny lines. Colin Firth though is the biggest drawcard. I have been in lust with him since he played Darcy in Pride and Prejudice. He is quiet and unassuming in this, but totally yummy as well. A good funny English romp, through the trials and tribulations of love.

After surviving an unexpected attack in enemy territory, jet-setting industrialist Tony Stark builds a high-tech suit of armour and vows to protect the world as 'Iron Man'.

Straight from the pages of the legendary comic-book, Iron Man is a hero who is built - not born - to be unlike any other.