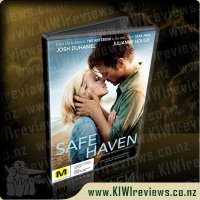 An affirming and suspenseful story about a young woman's struggle to love again, Safe Haven is based on the novel from Nicholas Sparks, the best-selling author behind the hit films The Notebook and Dear John.

When a mysterious young woman arrives in a small North Carolina town, her reluctance to join the tight knit community raises questions about her past. Slowly, she begins putting down roots, and gains the courage to start a relationship with Alex, a widowed store owner with two young children.

But dark secrets intrude on her new life with such terror that she is forced to rediscover the meaning of sacrifice and rely on the power of love in this deeply moving romantic thriller.

This is a beautiful movie, a classic love story in many ways, it captured my heart and had me captivated for the entire movie. I saw this advertised some time ago when it was first released at the movies and ever since I have been wanting to watch it! Safe Haven is based on a novel written by a favourite author of mine so I was extra excited to finally get to watch this film. I must admit that its been a long time since reading this particular story and when I read the back of the DVD it didn't seem in the slightest bit familiar to me. However as the movie unfolded I definitely felt that familiar feeling of 'I know this' - not in an annoying way but in a nice sort of comforting way. I know that's a strange thing to say about a movie but I think if your a fan of the author you will appreciate what I mean and the fantastic job they have done turning this book into a film.

Katie who is running from the police ends up setting up home in a small coastal town where she eventually makes friends, gets a job and starts her life again. She then falls in love with a local widower and his two cute children. I was so wrapped up in watching the movie that I had started to forget about how the movie starts and the fact Katie was on the run. However this didn't last long as her past starts to catch up with her and so the movie turns a dramatic corner. A couple of times I thought I had things all figured out but actually had them completely wrong! It keeps you thinking and at the same time made me appreciate my life.

I thought the actors did a wonderful job, and that the actors fitted the characters as well as fitting with how I pictured the book in my head (when reading it). It literally all come flooding back to me as I watched this movie and I really appreciated this. As with any great movie, there was great sets (pictures/lighting etc) and overall was just a beautiful feel good love story. I would watch this over again and will be recommending it to friends that's for sure. Definitely a "chick flick" - my husband wouldn't even "grin and bare it" through this one but that suited me and my lazy morning just fine haha

This is never a movie that I would have paid to see at the theatres nor rush to get it as a new release from the DVD store. However, I had seen The Notebook and enjoyed the movie, especially that it had a nice, sweet, feel good ending and so I put my hand up to review Safe Haven.

Katie is on the run from the police and catches a bus in a bid to escape. She ends up hopping off the bus during a rest stop in a small coastal town and decides not to hop back on the bus. While reserved and jumpy to begin with she slowly puts down roots, making friends and naturally, falling in love with a local widow and his two children. Of course, her past won't stay where it is and so enough things begin to fall apart.

This movie didn't offer anything that I didn't expect. It did manage to give me two small surprises, though both were nothing major and quite transparent once you were told about them. Katie and Alex are a nice, sweet couple but there is nothing going on that you don't expect. I think one of the real stars of the film is Josh, Alex's son, who misses him mum and is very unsure about this new woman coming into his fathers life.

This movie delivered nothing special, whilst it is a nice tale and most viewers are naturally hoping that they gain their happy ending and get to build their new life and watch lovely sunsets together for the rest of their lives, it didn't hold my attention. It's not a movie I'm in any rush to watch again, but I know a couple of friends who would love to see this and so I'll loan it to them. Nice, but nothing grand.