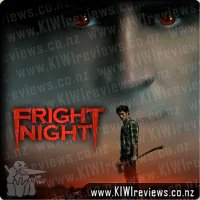 Senior College student Charley Brewster finally has it all - he's running with the popular crowd and dating the hottest girl in high school. In fact, he's so cool he's even dissing his best friend Ed.

But trouble arrives when an intriguing stranger - Jerry - moves in next door. He seems like a great guy at first, but there's something not quite right - yet no-one, including Charley's Mom, seems to notice!

After witnessing some very unusual activity, Charley comes to an unmistakable conclusion: Jerry is a vampire preying on his neighbourhood. Unable to convince anyone that he's telling the truth, Charley has to find a way to get rid of the monster himself, in this revamp of the 1995 comedy-horror classic.

The Curse of the Weeping Woman
Rating: 7.5

The first time I watched this it was due to my husband wanting to watch a vampire movie and I wanting to watch something with David Tennant in it though I wasn't looking forward to Christopher Mintz-Plasse being in it as I simply find him to be rather annoying. Anton Yelchin surprised me though that was mainly due to the fact that I had just seen him as Chekov in Star Trek with a heavy russian accent and so wasn't expecting to hear a born and raised american accent from him. Colin Farrell does a good job as the vampire in question and I certainly wouldn't want to meet him in, well, anywhere really as this character.

The special effects were well done, the house blowing up was pretty awesome but seemed a bit much for a movie such as this. The plot was ok but not the best vampire movie that I have seen (yet is still far better for me than Twilight

). The thing that made this movie fun for me was David Tennant and how well he played the cynical, drunk, stage show magician who has a haunted past and joins in the hunt, so to speak. This is a fun enough movie, though not very scary but could have been a lot worse.

This was one of those movies that had some great elements making an otherwise bland movie quite enjoyable and worth sitting through. To get the 'bland' out of the way:

The characters were rather flat and didn't grasp me as a viewer, in the whole - Notable exceptions will follow. The scenery was very modular and formulaic, which was totally in tune with the setting I concede, but did little to add anything to the movie. A tract housing estate somewhere outside of the Las Vegas strip is pretty much cookie-cutter housing indeed. Keeps the set costs down I suppose.

The plot, even for those who haven't seen the original, is rather predictable in many places, though the inclusion of a comedy element does liven it up a bit in places where it risked causing snores from the back row. None the less, the movie held few plot-related surprises.

On the plus side, though I think the 3d was pointless in many places, there were a few scenes where it's effectiveness was undeniable... then blood splattered everywhere, when the crucifix drifted down, and when things came flying in through windows... it worked. In the latter case, even expecting it, I still found myself dodging to my right. Thankfully I was the only one in the entire row, so didn't feel too embarrassed, since I didn't play head-but with anyone around me.

I have to say though, the highlights of the movie for me, were the performances by Colin Farrell and David Tennant... utterly masterful acting. David pulled off the sleazy, jaded Las Vegas stage performer trying to drown a haunting past in a never-ending parade of Midori bottles, while Colin WAS a 400-year old vampire, with all the cat-&-mouse play with the 'snacks', overshadowed by the sheer callous brutality when it came time to bite down hard.

Overall, this was a real mixed-blessing of a movie - not as cheesy as it could so easily have been, it was saved by a couple of good actors, some special effects that left little to be imagined, and a need for a night out no matter how corny it got.

When given the chance to act in the film of a life-time a former child star finds himself renting a family in an attempt to give himself the childhood that he never had.