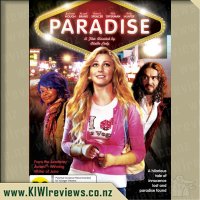 Diablo Cody, the Oscar inning writer of Juno, is back with another unique take on the world in this hilarious tale of innocence lost and paradise found, starring Julianne Hough (Safe Haven), Octavia Spencer (academy award winner The Help) and Russell Brand (Get Him to the Greek).

After a near fatal accident, 21 year old Lamb Mannerheim (Hough) is beginning to realise that the world is much bigger than her small, God-fearing Montana town. Armed with a big, fat insurance pay-out and a checklist of untried sins, there's only one place for her first taste of temptation... Las Vegas!

Now this wide-eyed, innocent girl will have to navigate the bright lights, seedy bars and dark alleys of "Sin City". And with the help of her outrageous friends (Brand and Spencer), Lamb just might survive her strange adventure and discover what it means to really live. Also starring Holly Hunter (Oscar winner The Piano) and Nick Offerman (TV's Parks and Recreation), this is an oddball odyssey of lost souls, broken faith and cheap cocktails.

A fellow reviewer was wanting some new movies to watch and popped this up offering to swap it, and it sounded interesting and I asked if she would swap with me.

Paradise follows a young woman, who after an accident which leaves her with lots of scarring and shatters her faith (which is big for her as she is in a very god fearing town), heads off to the bright lights of Las Vegas to tick things off her check list, the sins that she was raised against. lt does make you wonder how you can still get people who know so little about the world, but there are people out there that are this naive and clueless, it just tales a bit of getting used to, though I think part of that may have been because of how often I had to pause the movie.

The acting is done well, Julianne Hough is believable as this wounded young lady who is "new" to the world and doesn't know much at all, hasn't really lived life. The plot itself is nothing amazing and I couldn't say that it was hugely original but it was still fun enough, didn't have me laughing, but it was a pleasant enough movie to watch.

Paradise caught my attention on the list of available to review DVD's and I am so thankful of the opportunity to watch and review this DVD. I was thinking this would be a nice relaxing film to watch, full of laughs and nothing that requires much thinking (which is the last thing you want to do on a Friday night after a long week of work). I have to say I my thinking was exactly right and I wasn't disappointed. My husband also liked this movie and said "yep that was quite good actually, I could and would watch that again".

This movie is full of good actors and ones that I recognise from other films we have watched - I liked this as although they were acting as completely different characters you feel that familiarity as your watching the movie which only adds to the overall feeling and captivation. Great acting, lighting, settings and storyline all play a part in making this a great film - one that my husband and I would both pay to see again.

When I read the back of this DVD the little blurb actually matches up to the DVD and what happens - sometimes I've found they don't entirely match but this time round they did and that's something I really appreciate. There is nothing worse than reading the blurb then interpreting it a certain way and being disappointed when its not what you expected. I'm not entirely sure why but I did expect this to be a lot funnier than it was - it was definitely a good laugh - my husband found it funnier than I did so I guess it just comes down to different personalities and humour.

All in all a great watch and one I enjoyed - will be recommending this to others to watch too!

In a role critics are calling one of his best performances, Academy Award nominee, Jeremy Renner is Cory Lambert, a local game tracker. Out on patrol he stumbles upon the body of a murdered teenage girl, frozen in the desolate wilderness of the Wind River Indian Reservation. Still trying to come to terms with the death of his own daughter, Cory is forced, most brutally, to confront his own past.