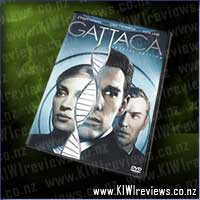 Ethan Hawke, Uma Thurman, Alan Arkin and Jude Law star in this engrossing Sci-Fi thriller about an all-too-human man who dares to defy a system obsessed with genetic perfection. Hawke stars as Vincent, an "In-Valid," who assumes the identity of a member of the genetic elite to persue his goal of travelling into space with the Gattaca Aerospace Corporation.

But when a single cell from any part of his body could betray him, how long can the truth remain hidden when we all shed 500 million cells every day?

A week before his mission, a murder marks Vincent as a suspect. With a relentless investigator in persuit and the colleague he has fallen in love with beginning to suspect his deception, Vincent's dreams steadily unravel.

I studied this film at University and watched it several times. This film, is set in a future where medical science is incredibly advanced. So advanced, that they can rule you as invalid from the moment you are born.

This throws the film and its storyline into the realm of ethics. If we could, then should we pry into the medical future of babies. This is already an ethical and political hot-bed where genetic tests can be preformed on embryos. Even in our present, there is talk about whether we should be able to know the gender of our babies in case we abort the "wrong" gender.

In this futuristic world, we follow our main character as he aches to enter the space program. We can't help but feel the unfairness of his situation. He is after all outwardly normal. Played by Ethan Hawke, he is in reality one of the beautiful people. Uma Thurman plays the love interest. Again she is someone who I associate with beauty, yet her character is flawed as well.

This film is beautiful and has a really original story. The cinematography is exceptional. The script is engaging, and the actors really take it to heart. Its a pleasure to watch, with a moral to boot. Even though I had to watch this, it wasn't a chore. I happily sat for study on those days.

Film tagline: "There is no gene for the human spirit."

In our library of around 700+ DVDs (and climbing), Gattaca is one of a handful that stand out from the rest.

This a great SciFi story of personal challenge, commitment to believing in yourself, and daring to reach beyond 'impossible' obstacles to own your dream. But it is also a vivid glimpse of a plausable future, where man's lust for perfection, power and control reaches to manipulation of the code of life with darker social consequences.

For a SciFi enthusiast - this is a must see, and an extremely highly recommended for anyone regardless of preferred genre.

Gattaca will inspire you, it might scare you, and it will make you think!

Produced 1997, this was the first movie written and directed by New Zealander Andrew Niccol, who went on the write some other exceptional screenplays including The Truman Show, S1mone, and The Terminal.

Back in '97 when this movie first came out, I was well into my studies on genetics, and as a side-issue arose the concept of "genetic discrimination as a side-effect of genetic engineering" - the concept that those with 'tidied up' genomes would become an elite group, more fit and enduring, generic abnormalities erased, stronger gene telomeres (the things that stop DNA chains from 'fraying at the ends' and thus spontaneously mutating in a bad way), and most importantly, resistant to pretty much all disease and infirmity not caused by a physical injury.

That's where this movie made it all so clear for me how bad it could get, and the timing was incredible. In this movie we meet a genetic 'Valid' - DNA tweaked while still just a blastocyst (fertilised ovum barely past the second or third division) and thus automatically a member of a growing elite group of humans... those with all the bad bits editted out. Problem is, no amount of genetic tweaking can prtect a person from a purely physical accident... they may be tough enough to climb a mountain, but not tough enough to walk away from a major fall.

In this position, we find the seedy underbelly of humanity thrives, selling the genetic signatures of those with all the right genes, but none of the abilities to make it in an increasingly genetist world. To maintain the lifestyle they are accostimed to, they must live as donors of genetic material to those less genetically fortunate than themselves, who in turn live as parasites, and risk extreme punishments if they are caught, since they are committing the ultimate fraud by the societies standards... and known as de-gene-erates.

Overall, this movie utterly blew me away 12 years ago, and it still does today... as we rapidly appraoch an era in which this kind of mentaility is all too plausible... and realistic.

Discover what it really means to be a penguin as the latest spy cameras give us a whole new perspective on the behaviour and extreme survival tactics of these incredible and hugely charismatic birds. Following the success of Polar Bear - Spy on the Ice, the spy cams move to the next level with Penguincam, a range of super-realistic animatronic cameras disguised as penguins, chicks and eggs.

Travelling to the freezing Antarctic to ... more...