ProdID: 3739 - March of the Dinosaurs
Topic: Dinosaurs in the Artic 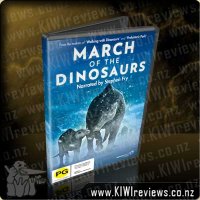 March of the Dinosaurs product reviews

70 million years ago the tropical jungles of the North Pole thundered with the footfalls of hundreds of dinosaurs. This epic sight heralded the start of an annual ordeal, as dinosaurs came together in huge numbers to escape the perils of a dramatic seasonal change the arrival of a four-month arctic winter of continuous night.

This incredible story is seen through the eyes of one of the most vulnerable members of the herd, a young Edmontosaurus, undertaking his first 1000-mile migration south. He will have to survive the treacherous and punishing volcanic landscapes, blizzards, landslides, droughts and of course - the deadly predators who lie in wait along the route. This heart-thumping and emotional polar odyssey is packed with epic scenes that no dinosaur film has portrayed before.

I put this DVD on yesterday afternoon so my daughter could have some wind down time before dinner. I was excited to put it on, because I love listening to Stephen Fry talk. He has a great voice for audio, nice and clear with that BBC English sound. Plus he always makes things sound so interesting when he is talking through something like a documentary. I have watched quite a few documentaries that he has presented for that reason. I'm also a big Fry fan anyway, having stuck with him through Fry and Laurie, Blackadder, and most recently QI. I've read everything I can get my hands on that he has written as well.

My daughter kind of knows who he is. But for her the most important thing is the story and the information in a documentary. I put this on and immediately I sensed she was engaged deeply in the material. This doco features CGI dinosaurs in the pre-historic Artic. Its a different world to ours, but some things remain the same. As we watch, we follow several dinosaurs as they try to survive their way through a harsh winter. Largely we are following dinosaurs who Darwin would give slim odds to. They are the young or the sick, and so there are moments of triumph and moments of utter failure. There are goodies and baddies as well. Its fictional story-telling allowing the viewer some possible insight into a world we can't "march" along to.

Some of the harder scenes I found my daughter dis-engaged before the danger moment and hid. While they are only CGI, you are made to really empathise with the animal and therefore its quite tense. Some things happen, where even I cried! But the show was still a big hit with my daughter and I. It fuelled some extra learning and discussion during and after, as well as some freeplay. My daughter decided she was a pterodactyl, donning a towel as wings and a blankie as a tail. Another a great title choice for us. Thanks Roadshow and KIWIreviews for selecting us.

Troy Bolton and Gabriella Montez are two totally different teenagers who meet at a party while singing karaoke on New Year's Eve. One week later Troy goes back to his high school, East High, in New Mexico to find that Gabriella is a new student there. They quickly become close friends and accidentally audition for the school musical. After getting a callback, drama queen Sharpay Evans and her sidekick brother Ryan are furious. Then Chad, ... more...