« The Sound of Music review 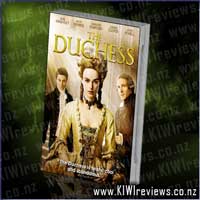 She befriends Lady Bess but finds she is once again betrayed by her husband who wields his power with the three eventually living uncomfortably together. Against this background, and with the pressures of an unfaithful husband, strict social pressures and constant public scrutiny, Georgiana falls passionately in love with Charles Grey, a rising young Whig politician.

However, despite his ongoing liaison with Lady Bess, her husband, the Duke, still has to be the master of her in all ways.

I really enjoyed this movie. The story line was solid. The Duke wanted an heir to the throne, and he would stop at nothing to get it. Even though he had affair after affair he would not allow his wife to do so until she had given him a son.

I felt this movie was a realistic portrayal of the 18th Century. The only thing I thought was out of place was the speech. It sounded more modern than it should've been.

I don't know what it is about portraying that era, but women's hair styles are absolutely hideous!!

I thought Keira Knightley played her part well. She looked as gorgeous as ever too! It must have been hard for her tiny frame to wear so many layers of clothing. I was surprised to see the Duchess partake in Politics and gambling as in that period not even all men were equal when it came to voting. You had to be of a particular class of male to vote, so not many women would've been allowed to partake in Politics or gambling.

Ralph Fiennes also played his role well too. His character didn't show much depth as he was a very private person. He was so private that he chose not to share his thoughts, opinions or desires etc with his wife, the Duchess of Devonshire. All the Duke expects of his wife is loyalty and an heir.

I will definately be watching this movie again.

At the start of his second year of his amazing journey into the world of wizardry, cars fly, trees fight back and a mysterious elf comes to warn Harry Potter at the start of the second year. This year at Hogwarts, spiders talk, letters scold and Harry's own unsettling ability to speak to snakes turns his friends against him. From duelling clubs to rogue Bludgers, it's a year of adventure and danger when bloody writing on a wall ... more...