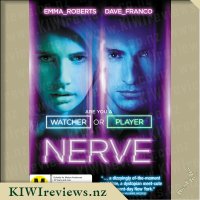 Disclosure StatementFULL DISCLOSURE: A number of units of this product have, at some time, been supplied to KIWIreviews by the company for the purposes of unbiased, independent reviews. No fee was accepted by KIWIreviews or the reviewers themselves - these are genuine, unpaid consumer reviews.
Available:
December 2016

Do you dare?
Do you have the nerve?
Kiss a stranger?
Get a tattoo?
Streak in public?
Ride a motorbike blindfolded?
What's next?

Industrious high school senior Vee Delmonico (Emma Roberts) has had it with living life on the sidelines. When pressured by friends to join the popular online game Nerve, Vee decides to sign up for just one dare in what seems like harmless fun. But as she finds herself caught up in the thrill of the adrenaline-fueled competition, the game begins to take a sinister turn with increasingly dangerous acts, leading her into a high-stakes finale that will determine her entire future.

Now this is a movie that really grabbed my attention - three friends and I watched it together and agreed that it was one of the most entertaining movies any of us had seen for a long time. The themes are very much aimed at teenagers, but although all of us are well past that age, we all interact with teens in various ways both within our own families and in our workplaces, so being outside the target age did not really matter.

The technology used throughout the film was state-of-the-art, but this more than anything else will cause the movie to date quickly as advances are made in telecommunications and computerised equipment design. Innovative machines like drones continue to improve daily, so no doubt the model used in the movie is already being upgraded!

I was reminded of several other movies which pursue similar ideas. Peer pressure is the initial motivation for Vee to join the game, but once in it she finds she cannot resist taking on yet another dare. Films featuring boy racers, competitive sports, jail breaks - all involve individuals or groups responding to a dare or challenge, but this movie takes it a step further as the dares get progressively more dangerous. In fact I would have a concern about younger viewers trying out some of the dares themselves: maybe there should be a rating higher that M, or at the very least, a warning not to try any of the stunts at home.

The photography is beautifully produced, combining art with hi-tech. Many of the scenes were shot after dark in New York, but judicious use of computer graphics in neon colours and the predominance of blue to highlight specific items like the motorbike made it look like a fairy-tale city. This increased the fantasy element of some of the later dares and made for a much more vibrant effect. The music complements the fast-paced action and slows only once, near the end of the film, in the scene where Vee emerges from the container and meets Ian. As they set off for the finals on the motorbike, the music picks up pace and volume once more in line with the faster action.

There are constant references throughout the film to Ian's past experience playing Nerve and his motivation this time round, but the final scene leaves it open for a possible sequel. To give more away would constitute a spoiler; it will be interesting, however, to see if a sequel does indeed appear in due course. There is still plenty of New York to explore!

The end credits are an amazing collage of music, computer graphics, colour and design. In fact, it is worth watching to the end for these alone. They sum up the culture of technology and digital devices that teenagers today can relate to, that have been an integral part of their lives since they were born. This is one movie that will not be switched off before it has run to the very end!

Journey Beyond Your Imagination.

Director Robert Zemeckis makes the best of both worlds in this big-screen adaptation of Chris Van Allsburg's books, as although the film is computer generated, the characters are all modelled on real human performances. A boy who doubts the magic of Christmas is taken on a train ride to the North Pole to meet Santa Claus (Tom Hanks).