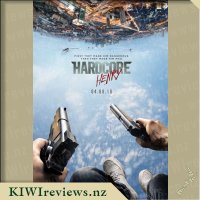 Disclosure StatementFULL DISCLOSURE: A number of units of this product have, at some time, been supplied to KIWIreviews by the company for the purposes of unbiased, independent reviews. No fee was accepted by KIWIreviews or the reviewers themselves - these are genuine, unpaid consumer reviews.
Available:
on DVD and BluRay from August 2016

Henry is resurrected from death with no memory, and he must save his wife from a telekinetic warlord with a plan to bio-engineer soldiers. He is helped by a mysterious stranger who apparently can't be killed, for long.

I heard about this whacky movie being filmed a while back, while strolling around the interwebs. There was a bit of a hype surrounding it because a) you never see the face of the protagonist - the entire film is shot from his point of view, b) it had Sharto Copley in it, who has rapidly become one of my favourite actors after seeing him in District 9, The A Team (reboot) and Elysium, and c) it involved some serious CGI work. In fact, it's easy to see where the budget was spent... because the props are ridiculous, the plot is thin, but the sheer smoothness of the blending between the real footage and the special effects - both splicing of footage and CGI overlays - was way better than I would have expected.

The biggest "joke" in the movie has to be "the baddie" Akan... After seeing the actor in "Vampire Academy" I thought he had some real talent - his IMDB profile is quite stuffed, albeit with Russian movies, so the level of ham-fisted tomfoolery he exhibited in this movie had me dumbfounded. He came across as more of a cartoonesque baddie - the sort with the big waxed handlebar moustache and the evil cackle laugh... I mean SERIOUSLY!?!

I was really taken by the role(s) played by Sharlto Copley - it gave him a lot of scope to show his range and versatility, and when it comes to grinning loonies on the side of the good guys, there's few actors I would pick as better for the role. Add in the age of the character, and that rarefied list shrinks dramatically, as many of the better ones are either too old, or dead.

The plot twist at the end, relating to Henry's wife, did take me by surprise a bit really. I am a little embarrassed to admit that, because normally with movies like this that have such a thin plot, I can usually spot the twists coming a mile away. But that was the funny thing about this movie, despite it's laughable premise, the shoddy acting by some of the cast, and the remarkably impossible feats some of the characters managed to pull off, I found myself liking it overall. Sure, it wasn't a great movie, and I didn't love it the way I love other Cheese-grade movies like Galaxy Quest, but I actually did like it enough that I sat through the whole thing, including the end credits.

Overall, this movie is one you need to go into with ZERO expectations - good or bad - and just bull your way through. By the end of the movie you may think you've made up your mind, but give some time to stew over in the back of your mind. As long as you don't think "That was a waste of and hour and a half of my life I won't get back" try watching it again. Think about you might cope if you woke with no memories, machines in your body keeping you alive, and no ability to speak.

Now displaying a greater confidence in his own power, Neo fully realizes that he is a superhuman ... more...