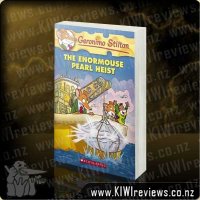 One day, Petunia Pretty Paws, Bugsy Wugsy, Benjamin and I, Geronimo Stilton, made an amazing discovery. We found a huge clam - with an enormouse pearl inside!

I was so excited about this extremely rare, precious pearl that I wrote a special feature about it in The Rodent's Gazette. That article attracted lots of attention - both good and bad! The enormouse pearl was in danger of being stolen. Would my friends and I be able to protect it?

Geronimo is back in another exciting adventure. This time he's off on a trip with his secret love, where he attempts to learn how to scuba dive and makes an awesome underwater discovery. Geronimo is such a quirky character - he is a total scaredy mouse and yet he still manages to save the day with the help of his friends. As usual the slapstick humor makes for lots of hilarity and laugh out loud moments.

It's quite a short book and it's not as action packed as other books that we've read but it still held my son's attention well. For younger readers the illustrations and font changes are great for helping to keep them interested. We loved the clues that were part of figuring out the mystery and they created a talking point so that we could discuss parts of the book and I could see if he really understood what had been happening. My son is intrigued by everything that lives in the ocean so the discovery of a giant clam was right up his alley. All in all it was a great book that we both enjoyed reading.

Geronimo Stilton is off on yet another exciting adventure! In this novel he learns how to scuba dive with his secret love and in doing so, stumbles upon an enormous pearl. The cover illustrates this quite clearly and does a great job of drawing the reader into the book.

The reader is a participant in the excitement, working along side Geronimo to solve the mystery. This is one of the most intriguing books in the Geronimo Stilton series as I'm sure almost all of us would like to find an enormous pearl in the ocean. It is also quite quirky as I think that it is sprinkled with quite a few more illustrations than there are usually in his books.

I would recommend this book to any younger Geronimo Stilton fan as its extra drawings make it not quite so challenging to read. It's probably a good starter to the series to get your younger readers hooked. It is a great story but not one I would buy, as my guys are a little older so for this one we would merely rent at the library because of the fact it is thinner than most of the books in this series and has more illustrations than usual so most kids will probably get bored of it fairly quickly.

We took this book along with us on our beach escape. It was a great thing to flop down in the unit and read after a day in the sun. It gave us all something peaceful to do on the couch. Even my baby was captivated by my reading, though she didn't know what we were saying of course. We finished this book over the course of two days. I read until my eldest daughter got bored, which took a surprisingly long time.

I asked her what she thought of the book and this is what she said. It was funny times 20, really funny. Her favourite character was Geronimo because he has weird feelings about water. He was afraid of getting his fur wet. The oyster was funny. She liked finding the clues. There were zero things she hated about it. She liked the whole thing. I asked her to read a couple of the words here and there, and found the strange font they use sometimes did not cause her any difficulty on the words she knew.

From my point of view, I liked the book. The slapstick comedy was more integrated into the story this time. Last time it was 3 pages of clumsiness tacked on to the end after the mystery was solved. This time, it was part of the nervous waiting Geronimo goes through. The clues were fun. I was surprised at how many my daughter worked out on her own. However, one clue had 2 answers, but only gave one possibility. I felt that was a bit poorly planned but it all worked otherwise. Later on at the beach, this book helped create a new fun game - finding "clams" for their pearls. She had a great time trying to find some, even if she was only finding cockles.

With this first picture book in Russell Brand's Trickster Tales series, the famed comedian, actor, and bestselling author delivers a hilarious retelling of an old fairytale favorite that will appeal to adults and children alike.

Once upon a time, long ago, in a time that seemed, to those present, exactly like now except their teeth weren't so clean and more things were wooden, there was a town called Hamelin. The people of ... more...