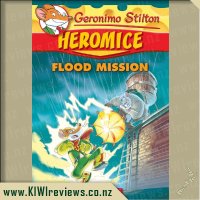 Disclosure StatementFULL DISCLOSURE: A number of units of this product have, at some time, been supplied to KIWIreviews by the company for the purposes of unbiased, independent reviews. No fee was accepted by KIWIreviews or the reviewers themselves - these are genuine, unpaid consumer reviews.
Available:
May 2015

Muskrat City is under attack again. The Sewer Rats have created a weather-changing device, creating huge storms that they hope will flood the entire city! The rodents of Muskrat City have one hope: the Heromice. Can Geronimo Superstilton, Swiftpaws and Lady Wonderwhiskers save the city?

Heromice is a spin off from the super popular Geronimo Stilton series. This book is the third book in the series but in saying that one of the beauties of this book is that it can easily be read as a stand alone.

The book is filled with action, adventure, cheesy superpowers, slapstick comedy and Geronimo Stilton's usual scaredy cat antics as our three Heromice, Geronimo Superstilton, Swiftpaws and Lady Wonderwhiskers, take on the Sewer Rats to save Muskrat City from being flooded.

My son (7.5 years) is perfectly capable of reading this book independently so we each took turns in reading a few chapters. The chapters are a good length but because of the differing fonts he did struggle to decipher some of the words - the bold and differing fonts may make it interesting for younger children to look at but it's hard enough sometimes when you're a young reader without different colours and styles getting in the way. There are lots of detailed illustrations and my son particularly enjoyed reading the text on them. All the plays on words (fabumouse, enormouse, etc) just add character and realism to the story and my son always has fun with Stilton's quirky phrases.

You can't go wrong with the concept of good guys and bad guys and children always tend to find that appealing. We'll definitely be reading this book again and I can't wait for the next big Heromice adventure.

Mr 5 and I are fans of Geronimo Stilton books and we are gradually making our way through the variety of different sets. This is the first Heromice book that we have read. We found that it was quite different to the other books we have read and the characters were mainly new to us. At the beginning of the book, we spent a bit of time going through the characters that we would find in the book. Mr 5 enjoyed working out the relationships between the various characters and who the goodies and the baddies were. He thought it was very funny that the henchmice were brainless and that there were characters named One, Two and Three! We referred back to this page on numerous occasions during the reading of the book as Mr 5 worked out who everyone was.

As we moved through the story, we laughed at Geronimo Superstilton's bumbling personality. He really struggles to get things right and to be the superhero that he should be. Superstilton, Swiftpaws and Lady WonderWhiskers battle against the nasty Sewer Rats to save Muskrat City from being flooded. The story is full of adventure and danger for the characters. It is a cross between the Geronimo books that we have previously read and a story about any superheros. This is a perfect mix for children to read and enjoy.

At various times, during the week, Mr 5 has come out with comments linked to the book. One of the kids at school thought it was very funny when he blurted out "super swiss slices". I guess you kind of have to read the books to get it but Mr 5 and I chuckled away to each other as I dropped him off in his classroom.

The layout of the book was very familiar to us as regular Geronimo Stilton readers. We have certainly grown to love the way that these books are put together. There are lots of exciting illustrations, short paragraphs, and fun, colourful words which stand out from the rest of the nice, clear text. I find that Mr 5 enjoys looking at the colourful words as well as the illustrations when I am reading to him. He isn't yet at the stage where he can follow the text as I read and he picks out the odd word that he knows. He enjoyed reading the words on the illustrations as we moved through the book. As usual, there is some juicy language that children can bring across to their own writing. There are also made-up, fun words such as 'enormouse' and 'famouse' which add to the novelty of the text.

Mr 5 and I sat down each morning to read 'Flood Mission' before school. It became a regular event and he looked forward to it. He commented about the book as well - "I liked Geronimo's boats because they protected him from the bad guys in Muskrat city. Geronimo, Lady Wonderwhiskers and Swiftpaws are the best characters. The book was really exciting but a little scary in some ways too. I would recommend this book the five and six year olds or older children too."

As a young adult novelist Philip Murdstone has won all the prizes, but his sales are miniscule and he loathes himself. Does he suffer a nervous breakdown or does he get drunk at his local Devon pub, accidentally fall asleep in a stone circle and summon Pocket Wellfair, a fantasy character who dictates inkage, which proves to be world bestseller fantasy material. BEWARE This novel contains foul language and foul thoughts.