Magic in the Blood review

ProdID: 2227 - Magic to the Bone
Written by Devon Monk 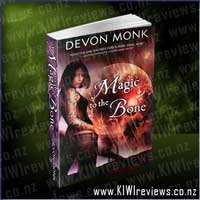 Disclosure StatementFULL DISCLOSURE: A number of units of this product have, at some time, been supplied to KIWIreviews by the company for the purposes of unbiased, independent reviews. No fee was accepted by KIWIreviews or the reviewers themselves - these are genuine, unpaid consumer reviews.
Available:
February 2009

Magic to the Bone product reviews

"Using magic meant it used you back. Forget the fairy-tale hocus-pocus, wave a wand and bling-o, sparkles and pixie dust crap. Magic, like booze, sex and drugs, gave as good as it got."

Everything has a cost. And every act of magic exacts a price from its user - maybe a two-day migraine or losing the memory of your first kiss. But some people want to use magic without paying, Offloading the cost onto innocents. It falls to a Hound to identify the spell's caster - and Allison Beckstrom is the best Hound there is.

Daughter of a prominent Portland businessman, Allie would rather moonlight as a Hound than accept the family fortune - and the strings that come with it. But when she discovers a little boy dying from a magical Offload that has her father's signature all over it. Allie is thrown back into the high-stakes world of corporate espionage and black magic.

If Allie wants the truth - she has to call upon forces that will challenge and change her... and make her capable of things that powerful people will do anything to control.

Magic in the Shadows
Rating: 9.8

The Other Typist
Rating: 6.8

The big book of everything for boys
Rating: 9.5

"Using magic meant it used you back. Forget the fairy-tale hocus-pocus, wave a wand and bling-o, sparkles and pixie dust crap. Magic, like booze, sex and drugs, gave as good as it got."

That really sums up the whole rationale behind magic is the world this book is set in. Magic flows like water, pooling deep underground, but with the right equipment can be drawn up and redistributed, rationed out and used by those with the skills to do so. And just like any other commodity, it can be used and abused by the wrong crowd, turned to dark and devious purposes. Because magic requires certain glyphs - hand gestures in sapce and time - to cast, each caster leaves their own imprint on the magic in much the same way we all have our own fingerprints and handwriting styles. The gestures are readable like handwriting, and each magic-weilder has an essence, like a small of megic, about them that gets imprinted on the casting. The main character, Allison Beckstrom, is a Hound... a magic user with the special combination of skills that allow her to sniff out a spell, perceive magic in it's native form and track it back to the person who cast it. Using magically-enhanced senses of sight, smell, taste, touch and hearing, she can identify the magic, and track it back.

Sometimes, this proves a little tougher than you would think. Just as there are Hounds, there are magical forgers known as Hands, people with the ability to 'know' a caster's intrinsic essence and forge magic in their style. I cast, you pay the price. And the price is always pain... at best. Sometimes it can be worse... far, far worse. For Allison Beckstrom, the price of doing her work is losing chunks of memory... sometimes it's very early stuff, sometimes it's the recent past. This can make social situations really awkward at times, especially when it comes to affairs of the heart.

Overall, this story has a lot of powerful plot elements, and characters. This keeps it highly immersive, entertaining and enthralling. OK, though I once again ended up reading a following book first, and thus some of the suspence was taken away by effective foreknowledge of what was to come, I still found it to be quite gripping. I knew where the road was going to lead, but I still found I wasn't able to accurately predict just what route it would take to get there. One of the bad guys was quite easy to spot, but one of the goodies was damn near impossible to know until expressly pointed out near the end of the book... so it was still full of surprises in the most unexpected places. A great start to the series, and since I have already read book 2 I am keenly awaiting book three, due out shortly if reports are accurate.

I am the Cry Baby of the Beach. I am the Wimp of the Water. And I am not going in the sea. End of story.

When you're a sea lion too scared to swim, you get a fair bit of teasing. So instead, the Wuss of the Waves makes up exciting stories of sealers, shipwrecks and castaways. But when she finds herself in real danger, will she be brave enough to escape?