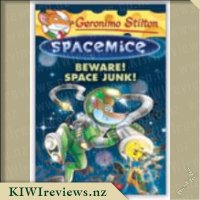 MouseStar 1 is surrounded by floating space junk. It is yucky and dangerous. Geronimo Stiltonix tracks down the source of the junk, and meets very wasteful aliens. Even worse, robots that the aliens threw away have started to rebel. Can the spacemice restore harmony before the robots take over.

I have started looking for books my 7yr old son will be interested in to keep his interest in reading and we love Geronimo Stilton. I love the fact that someone has done a series focused mainly on boys but am sure a lot of girls will love these too. I find it hard to get books that really keep my sons attention and focus.

Geronimo Stilton is a mouse who writes about his different adventures with his family and friends. This book is from the Spacemice series, the author also has done other series based in Caveman times, fantasy and also a series on Thea Stilton targeted at girls. The books are bright and colourful and he picks out different words on each page and puts them in coloured and different fonts to really make the page interesting for kids.

This story is based on Geronimo tracking down who is making all the trash that is floating in space and the aliens and robots he encounters along the way. The book is 113 pages broken up into chapters. I would suggest 8-9yrs plus would be able to read this on their own but all kids younger would love to have these read to them. Geronimo Stilton has made in onto our bookshelf as a series that we are starting to collect and know that my kids will grow up loving these.

This book was a double win for us. The story deals with space junk. So there is lots about using things and throwing them away and what people could do instead. Although it is about space junk, it's basically more about looking after our planet and thinking before becoming a "throw away society".

My eldest daughter is a bit of an eco-warrior. She doesn't like to see litter about the place and is always looking for ways to recycle or re-use things. She uses old stuff especially in her art. She has always been keen to spend some of her time at the beach with a rubbish bag, cleaning up after fishing boats too. Secondly, it's a Geronimo book, and even thought it's the spin off Spacemice, it's still the familiar characters Miss 9 loves. She has been a fan of Geronimo for about 3 years now and her sister is really starting to get into it as well. That means the book gets twice as much reading, and later when they can both read independently I know they'll re-read it again too.

For me I felt that the book dealt with the theme of trash and recycling really well. It opened up a lot of conversations for us as well. After all, everyone wants the latest device but then what happens to the things we discard? My daughter asked a lot of questions around that as we were reading and I was thankfully able to tell her about e-recycling. I could also tell her about charities that take in old mobile phones and computers for use by others. I could point to times we have donated devices to daycares and schools. I could also show her how when we get a new device, that in turn allows us to upgrade her own computer with our old pieces.

This book was really neat. It helped to point out behaviours that we all have that might not seem harmful but can be. Of course the behaviour in the book was over the top! But some people do think in that way and if we all did it, then this planet would be in a great deal of trouble. I'd recommend this book to any Geronimo fan, and to anyone interested in Space. Any parent looking to discuss the planet's future with their kids could use this as a starter. It would even be useful in a classroom, if the they are doing a module on recycling and caring for our planet.

The infamous, Most Wanted Goosebumps characters are out on the loose and they're coming after you! Catch them all, undead or alive!

Ray Gordon really likes the circus. His uncle, Theo, is a performer in Koko's Klown Academy and he invites Ray to come join him for the summer. At first, Ray's parents are reluctant - they know their son has a habit of getting himself into strange situations. But Ray manages to convince ... more...