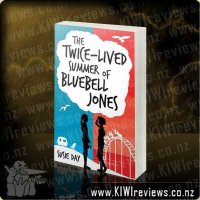 On her thirteenth birthday, Blue makes a desperate wish. To be transformed into a cool, confident teenager. Enter Red, appearing from nowhere like a wacky fairy godmother. She's only visible to Blue - in fact, she IS Blue, but a year older.

With Red by her side to guide her, Blue can avoid all the gruesome embarrassments! But her future self causes a heap of crazy trouble - and there are dark secrets she's not telling...

The Promise of Puanga: A Story for Matariki
Rating: 10.0

The first thing that drew me to this book was the cover. Its such a simple design. Half red, half blue with Blue and Red's silhouettes and a few motifs from the fairground and camping site in the book. The black is shiny on the matte cover and feels nice under your finger tips. I opened the book and felt fairly immediately that this was a younger version of myself. Bluebell is shy, and terrified about becoming a teenager. She clings to her childhood in a way I could totally relate to.

On her 13th birthday she makes a wish, which in turn brings magic and time travel into her life. An older version of her appears, seemingly to rescue her from herself. To help her transition into the teenager she is meant to be. But this older version keeps secrets from her, about the future. Lots and lots of them in fact. Just when you think she couldn't be hiding anything more, she is. As the book went on, I found myself getting increasingly annoyed with Blue. The very thing that drew me to her, seemed to repel me as well. Her maturity level about some of the secrets was shocking at times.

But nowhere near as shocking as how I felt after the book finished. It took me maybe 4 hours to read this book. It was 1am when I finished the book last night and it was approximately 4am before I managed anything close to sleep. Over and over my head turned the ending. I was absolutely shattered but I couldn't turn my brain off. Going through each piece of the puzzle, realising how deep the story was twisted in the book and in my head. What can I say? Any fictional character that has that much of an impact on me, is the mark of a good writer. I can't wait to read Susie Day's next book, but I'm also going to wait and get some sleep first!

The fourth book in the beloved Harry Potter series, now illustrated in glorious full color by award-winning artist Jim Kay.
Harry Potter wants to get away from the pernicious Dursleys and go to the International Quidditch Cup with Hermione, Ron, and the Weasleys. He wants to dream about Cho Chang, his crush (and maybe do more than dream). He wants to find out about the mysterious event involving two other rival schools of magic, and a ... more...