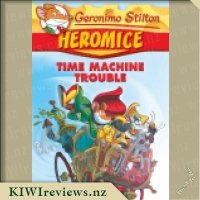 Timeless cheese sticks! Professor Maximilian Mousemover just arrived in Muskrat City ... in a time machine! Tony Sludge's great-great-grandfather Butch Sludge is visiting from the past too, and he's up to no good. The Heromice must travel through time to save the rodents of the past - and the future - from the Sewer Rats.

Nothing is impossible for Geronimo Superstilton! He helps watch over Muskrat City, ready to fight evil at all costs. He is strong ... he is invincible ... he is fearless! (Well, almost.) He is one of the Heromice!

My 9 year old is an avid reader and loves Geronimo Stilton books. When she saw this her face lit up and she couldn't wait to start reading. In fact, she started it in the car and read the whole 30 minute journey home. Not a sound did I hear pass her lips and by the time we had arrived home she had read over half of the book. She ran off to her bedroom and another 30 minutes passed before she joined us remarking that she had 'finished' and that she loved it. The book is about a band of Heromice that must travel through time to save the rodents of the past and future from the Sewer Rats. This was the first book in the Heromice series that she has read but is now hooked and can't wait to read the others.

One of the things I love (and my daughter) is that at the beginning of the book there are colourful drawings of all the main characters and a brief description of them. The Heromice (the goodies) consist of characters such as Geronimo Superstilton, Lady Wonderwhiskers and Swiftpaws whilst the Sewer Rats (the badies) are made up of a group of rats called Tony Sludge, Slickfur and Elena Sludge. The book has a great mix of text and colourful drawings throughout and the Chapters are relatively short. There are certain words and phrases that are emphasized by the use of different fonts and colours which breaks the text up and makes it easier and more interesting for the younger reader. My daughter reread the book a week later and kept calling me over to read excerpts from the book and show me pictures and she thoroughly enjoyed it the second time round too.

At 116 pages, this is a great read for emerging chapter book readers and an excellent addition to the Geronimo Stilton series. Highly recommended. Mr Seven was very happy to see this title as he has already read "Flood Mission" and "The Invisible Thief" in the same series, so he knew what to expect. He told me that the Heromice are a little bit like the Avengers or the Justice League because they band together to sort the baddies out. After reading the book myself I would have to agree with him; all of Geronimo Superstilton's partners have a special power, and together they are a force to be reckoned with.

Before I had finished writing the review, Mr Seven had started reading the book himself and was so engrossed in it that I had to interrupt him when I needed to look at it too. He understands the functions of a time machine and so he could not wait to see what would happen to Geronimo and his friends. We looked at the pictures and he said it looked as though they were of the olden days so the story would probably involve going back in time to when Muskrat City was still known as Muskrat Town.

At the start of the book, Geronimo Stilton is a newspapermouse (just like Clark Kent who is a human reporter!) and he has been assigned to cover the big game between the Parmesan City Pawbreakers and the Fabumouse Furbusters. It is very cold so he is prepared with his padded hat, and warm scarf, and a thermos of cocoa when he arrives. No such luck! He is promptly called away for an emergency. He has to change into his secret identity as Superstilton which he is reluctant to do - he had been looking forward to watching the game.

Geronimo is not sure how to control his magic powers and is permanently surprised when they kick in, but somehow he seems able to emerge from all his scrapes without being a loser. His assistants, the Heromice, are similarly the most unlikely heroes of all! He has lots of supporters on the team - Swiftpaws and Lady Wonderwhiskers in particular as they always have his back. They are introduced at the very start of the book which is useful because, unlike Mr Seven, I was being introduced to the series for the first time.

I cannot end without quoting a passage from the book which is similar to something Mr Seven and I often say to each other. If he says "Say Pardon me" I respond "Pardon you!" This makes both of us laugh as we can spin the game out for a long time, mixing up the pronouns and playing with the words. Towards the end of this book, Superstilton gets tongue-tied and says "Um, yes, thank me, I mean, thank you, er, not me..." This made both me and Mister Seven laugh with amazement. As Swiftpaws would say, "Oh, supersonic space cheese!"

For the Grown Ups:

"Wait! Just Wait!"
You find yourself saying this all the time, right?

Well, We're sorry, but you're gonna hate this book!

This book is going to make you wait too. Once you and the kids start reading it, you can't do anything else until it's ... more...