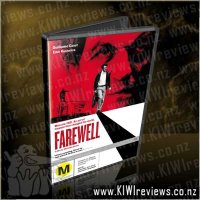 In 1981, Colonel Grigoriev of the KGB, disenchanted with the Communist ideal, decides he is going to change the world. Discreetly, he makes contact with Pierre, a French engineer working in Moscow and little by little passes on documents to him - mainly concerning the United States - containing information which would constitute the most important Cold War espionage operation known to date. During a period of two years, French President, Francois Mitterrand and US chief Ronald Reagan were to personally vet the documents supplied by this source in Moscow, to whom the French Secret Service gave the codename 'Farewell'.

Farewell smuggled out information that would cause ructions that sounded the death bell of the Soviet Union. The Berlin Wall would fall before the end of the 80s. In his own way, Farewell managed to change the world, by avoiding traditional espionage methods too well known to the KGB and by not asking for any financial compensation whatsoever, "much too capitalist" for his taste. He simply followed his destiny, so that a new world might dawn for his fellow Russians, but especially for his son.

Birds of Prey (and the Fantabulous Emancipation of One Harley Quinn)
Rating: 7.8

I tend to avoid foreign language films: partly because I tend to spend too much time reading the text and not enough enjoying the film but there are always some exceptions to the rule - and Farewell is just one of them.

Farewell is based on the true story of the interaction between a disillusioned KGB agent and a French engineer to whom the KGB agent passes secrets. The ramifications of what was passed are still being discussed even 30 years down the track.

The usual words used to describe such films are: Hard-hitting, gritty, riveting, compelling, emotional - and it would be hard not to use them, because the film is all that and more. I was hooked in quickly and was compelled to stay to the end to watch the final scene. It was also interesting to see (dare I say 'historical') characters cropping up in the film - President Reagan, Mitterand, Gorbachov and others, giving a topical realism to a context I remember well (even if the actual events are something I knew nothing about).

For something a little different and a little less 'Hollywood' than the usual espionage films, you couldn't go wrong with this film. I can honestly say not only have I thoroughly enjoyed the film, I could thoroughly recommend it to all who wish to see something beyond the glitz, glamour and romanticism of standard Hollywood espionage films.

Incredible technology wielded by a mind of infinite evil is threatening the safety of the entire world. To fight hte unthinkable, the British Government will have to mobilize the extraordinary.

This team - The League of Extraordinary Gentlemen - is the only thing standing between the future and total destruction.

Massive war machines explode across the battlefields of Eastern Europe, and throughout the British Empire a ... more...