Honey I Shrunk the Kids review 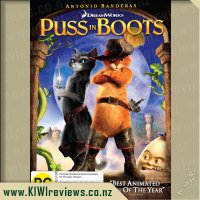 Sometime before Puss (Antonio Banderas) meets Shrek and Donkey in Shrek 2, he arrives at a town while escaping a bounty hunter. There he learns that the outlaw couple Jack (Billy Bob Thornton) and Jill (Amy Sedaris) have the magic beans he's been looking for most of his life, beans that can lead him to a giant's castle holding valuable golden goose eggs.

When Puss tries to steal them from the outlaws' room, a masked cat (Salma Hayek) interrupts. Both fail and escape, He learns that the masked cat is Kitty Softpaws, and is shocked to learn that she is a girl. She is allied with Humpty Alexander Dumpty (Zach Galifianakis), a talking egg and Puss' long-estranged childhood friend from the orphanage where he was raised. Humpty attempts to convince Puss to join them in finding the beans and retrieving the golden eggs.

I've seen all the Shrek movies, so when I heard this when it was coming out I was kind of over the whole franchise, so wasn't fussed about it. This aired on free to air TV recently so I recorded it assuming the kids would enjoy it, we watched it tonight and I was right. This is essentially a prequel for Puss in Boots and lets us know a little more about him. We also get to meet a few well known characters and also an idea of where some ended up ie. Jack and Jill are married and master criminals!

I wasn't too hooked by this movie, though I did like that Kitty Softpaws is just as good at fighting, leaping, hiding etc. as Puss in Boots is and even though she has no claws she is kick ass at taking things without you having a single clue till you see it in her hands. The plot was ok but I really didn't like Humpty Dumpty, no matter what they did with his character, so I couldn't have cared less what happened with him at any point in the film. The kids were all hooked and my eldest was asking if we had it on DVD or not, so if I can pick it up cheap this would be a good addition to the kids DVD collection.

I watched this mainly because I have seen Shrek 2 and I was interested to know the story behind Puss in boots and wasn't disappointed with the story and thought that the characters were good, the animation was incredible and the voices were really well done. The way Puss gets around people by looking cute and innocent was really well done.

Sometimes when watching an animated movie it is easy to picture the actor who is doing the voice rather than seeing the characters but I am pleased not to have that happen this time as the story is too engaging.

I would recommend this movie to others with young children as this was a really enjoyable family movie, any movie that can get active boys to sit still and watch is a winner in my books. I will be looking forward to more great movies like this.

Winner of 6 Academy Awards including Best Director for writer/director Damien Chazelle, and winner of a record-breaking 7 Golden Globe Awards, La La Land is more than the most acclaimed movie of the year - it's a cinematic treasure for the ages that you'll fall in love with again and again. Emma Stone and Ryan Gosling star as Mia and Sebastian, an actress and a jazz musician pursuing their Hollywood dreams, and finding each other, in a vibrant celebration of hope, dreams, and love.