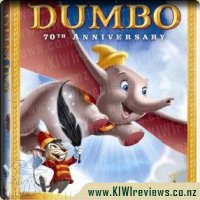 Lovable little Dumbo's mother thinks he's the most perfect baby elephant ever, but the rest of the circus herd can't get over mocking his oversized ears. When Dumbo's mother is locked up for trying to defend her baby, the little elephant is left at the mercy of the mean elephants and the uncaring circus crew, who make him into a clown. It's up to tiny ringmaster pal Timothy Mouse, a pack of wise talking crows, and a magic feather to show Dumbo that his ears, which make him different, can also make him shine.

Dumbo is another of my all time favourite movies. A classic movie that can be watched over and over again. Or in my case, over and over and over again. Even before having children Dumbo was one of my favourite familt movies. The tale of a little elephant who soon after being delivered to his mother as a baby, sneezes, and in doing so sneezes 'out' the most biggest ears imaginable. In doing so the little elephant is then taunted and teased by all the other elephants, animals, and children and adults he comes across.

I used to have a wee giggle to myself when friends and family would cry while watching movies. So after having children of my own it waa quite a surprise when the first movie to make me shed a tear was Dumbo lol quite a surprise because I had watched this movie countless times before. But having children opens your eyes to a whole new story when it comes to movies, and it is easy to imagine yourself in a similar situation, even that of a protective mama elephant lol

A classic movie with a lovely story line and wonderful animations to match. I don't cry now when I watch it though, but that same scene still makes me sad ;)

There aren't many films that have stood the test of time like Dumbo has. Even with the glaring changes in society, the film still shows a deep amount of emotion that reverberates within all viewers. still in the days where childbirth is represented by literal stork, Jumbo Jr. is introduced into the story. Bullied because of his large ears, he is given the nickname Dumbo.

There are many great things that are shown in this film, whether it be the cruel conditions that animals are placed under in travelling circuses (most exotic animals have been outlawed from circuses worldwide since), the effects of alcohol and inebriation, bullying, acceptance, the power of the placebo and beliefs. There are many things that give you a lot to think about if you choose to, and provides a plethora of life lessons that you can have with your children, when they start asking questions afterwards.

Although many parents would hide from the fact that a film would lead to a multitude of questions, I see it as a positive effect of the film. I would be concerned if children just watched it and believed everything without thought. This film gives as good a chance as any, to encourage the importance of animal rights amongst children.

I'm sure I have watched this as a child, but I couldn't remember too much about it. I knew Dumbo was born, and made fun of. I remember that his mother is imprisoned and that I felt it was very unfair. When this was showing tonight on television, we sat down to watch it.

This film was released in 1941, so there are a few things about the story and the representation of people that I found a little off. There were clear racial stereotypes, and the sheer amount of animals in the circus was quite different to circuses these days. But you need to put that aside because this film is older than my own parents. I used it as a teachable thing.

In fact this whole film allows you teachable moments with your children. How we treats someone who is different, for example. Dumbo is what he is called all the way through the film, but it's not the name he is lovingly given. This made me sad. Then the way his mother is treated, made me cry. And the way she loves him from afar as well, had me cuddling my babies close and shedding a few tears as well.

Of course it wouldn't be a great film, if things for Dumbo didn't turn around. This film is really short, a good length for children's attention spans. These days I think film makers are being hopeful when they release something more than 90 minutes for kids. It definitely moved me and made me think about how we are towards people who look a bit different. I'd absolutely watch this again.