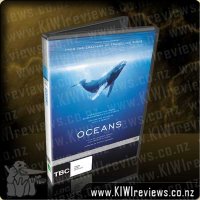 Nearly three-quarters of the Earth's surface is covered by water and Oceans boldly chronicles the mysteries that lie beneath. Directors Jacques Perrin and Jacques Cluzaud dive deep into the very waters that sustain all of mankind, exploring the dynamic reality and the amazing creatures that live within. An astonishing look at the world of the oceans, with never-seen-before imagery captured by the latest underwater technology, it is awe-inspiring stuff.

Shot over four years, it reveals inspiring wildlife, including endangered marine species. Oceans is also part thriller and part meditation on the vanishing wonders of the aquatic world. It's a powerful celebration of our underwater world; a world that requires our attention. Visually spectacular yet with a silent eco-message. Oceans is one of the most successful documentaries of all time, grossing more than $100 million at the box-office worldwide.

I want to start with the negatives, and get them out of the way... No Bonus Features. There, that was easy. Now on to the rest of the review...

Astounding footage! Impressive array and variety! Mostly acceptable narration. (OK, I think Pearce Brosnan did an OK job in the movies, but have to admit his voice was perfect for this... if a little monotonous in places.) This is a documentary on a scale never seen before really... 4 years filming and it encompasses nearly every known creature in the oceans... and every possible oceanic habitat that man can reach. From the shallows just off the beach, to the depths where whales glide effortlessly... from the smallest shrimp to the largest mammals on the face of the Earth, from those who live forever in the ocean embrace to those who visit only briefly in the search for food... and everything in between.

Some of the bits that most impressed me...
•  Pods of dolphins, hundreds strong, in a feeding frenzy on anchovies, who are then joined by a few hundred Frigate birds, some sharks, and even a few whales... and none of the predator species got eaten by the others.
•  A single jellyfish that was 2 metres in diameter, swimming along being studied by a diver a quarter of it's size.
•  The scene of a whale gliding just a few feet over the sea bottom, without raising any silt or sand at all.
•  The couple of scenes of the cuttlefish in action, especially the bits where they 'strobe' to hypnotise their prey just before striking. Truly amazing critters, and top contenders for the next dominant species if we wipe ourselves out.

Honestly, I am really struggling to find the right words to really put across what a mind-opening revelation this movie is, without somehow cheapening it by compressing the sheer splendour, the education, the eye-opening majesty of it into a few cheap paragraphs... or overwhelming you with pages and pages of detailed notes, thus ruining the impact when you see it for yourself. So I'll try this...

Overall... you need to see this. And so do your kids. Before it's too late. There.

Score: 7.6
Product reviews for listing 2856: Life As We Know It
Directed by Greg Berlanti

After a disastrous first date for caterer Holly and network sports director Messer, all they have in common is a dislike for each other and their love for their goddaughter Sophie.

But when they suddenly become all Sophie has in this world, Holly and Messer must set their differences aside. Juggling careers and social calendars, they'll have to find common ground while living under the same roof.