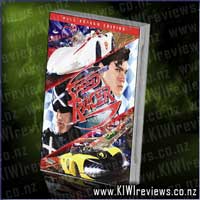 Hurtling down the track, careening around, over and through the competition, SPEED RACER is a natural behind the wheel. Born to race cars, Speed is aggressive, instinctive and, most of all, fearless. His only real competition is the memory of the brother he idolized-the legendary Rex Racer - whose death in a race has left behind a legacy that Speed is driven to fulfil.

Speed is loyal to the family racing business, led by his father, Pops Racer, the designer of Speed's thundering Mach 5. When Speed turns down a lucrative and tempting offer from Royalton Industries, he not only infuriates the company's maniacal owner but uncovers a terrible secret - some of the biggest races are being fixed by a handful of ruthless moguls who manipulate the top drivers to boost profits. If Speed won't drive for Royalton, Royalton will see to it that the Mach 5 never crosses another finish line.

The only way for Speed to save his family's business and the sport he loves is to beat Royalton at his own game. With the support of his family and his loyal girlfriend, Trixie, Speed teams with his one-time rival-the mysterious Racer X to win the race that had taken his brother's life: the death-defying, cross-country rally known as The Crucible.

When we watch a movie for the first time as a family we normally watch from beginning to end without moving. However, with Speed Racer we found the first time around we got a bit lost with the plot. We did wander off a few times and come back to it. But since then we have watched it through many times and found it great. We now know when the most exciting bits are coming and look forward to them.

The temptation to jump ship followed by family loyalty throughout are great lessons and for that it was excellent. It's hard to explain but it was put together in a bizarre maybe quirky kind of way. To be honest the boys in our family liked it most for the race scenes and the rest was just ok.
The graphics were great and even though we knew half of it couldnt happen they made it really look like it could.
Corny acting.

Not at all the best movie these boys have brought out, and certainly not a patch on the Matrix movies. With a very crowded screen at all times, bright garish colours, harsh music and over-hammed acting by nearly all concerned, this movie REALLY appealed to the kids but not to the adults.
This actually proved to be its best selling point for me. It meant that we adults could all gather outside on the patio and chat in peace while the kids wreacked merry hell down in the lounge, zooming around the room pretending to be driving the amazing stunt cars.
The story is pretty good in itself, and has some great moral issues buried in it for the kids, like "cheating will only ever get you caught" and "bad guys may finish first, but they dont always win".
If you have a mob of kids to entertain, this would be a great one to consider. Bright lights, fast cars, lots of dinky gadgets, and even a trained chimp..... how could they resist!