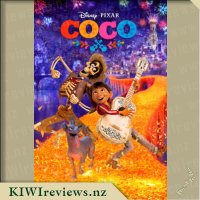 Despite his family's baffling generations-old ban on music, Miguel (voice of newcomer Anthony Gonzalez) dreams of becoming an accomplished musician like his idol, Ernesto de la Cruz (voice of Benjamin Bratt).
Desperate to prove his talent, Miguel finds himself in the stunning and colorful Land of the Dead following a mysterious chain of events. Along the way, he meets charming trickster Hector (voice of Gael García Bernal), and together, they set off on an extraordinary journey to unlock the real story behind Miguel's family history.

Pixar know how to bring out a great film and I always get excited to see what they bring out next. The trailer for Coco was no exception and I knew this was one I had to see, it also helps that I love Dia De Los Muertos (Day of the Dead). Coco is a musical but it isn't one where characters break out into song because it suits better to sing it rather than say it, all the songs are sung because there is a performance or trying to get a loved one to remember or because it is asked as a request, not just a 'let's throw in a song here' moment. The songs are well suited and the main song 'Remember Me' didn't get tiring because though we heard it multiple times it wasn't the same each time.

One thing I really like about this is just how much it embraces the Mexican culture, you can tell how much thought went into it. It's set in Mexico, the characters sound Mexican, the traditions are mentioned using the Mexican language and then translated for the rest of us, but not in a 'you're dumb' way which was nice and throughout every conversation are Mexican words that are easy enough for you to work out without translation but add to the overall feel of the film really well. The animation, is as is expected from Pixar, wonderfully done, the differences between the land of the living, land of the dead and Miguel in the middle are so well done.

I love all the characters in the background, some more obvious, who are famous people from Mexico, such as the obvious to almost all, Frida Kahlo, I thought this was a really good aspect to the film and helped cement it as a more authentic film. My favourite creatures were the alebrijes, I thought they were stunning and I loved the variety and that they had their own personalities as well. This film has become one of my favourite films and when it came out, I even insisted that my mother join us so we could watch it on the big screen again, never mind the number of rewatches at home...

I Love Coco! I Love this film!

Gary "Eggsy" Unwin (Taron Egerton), whose late father secretly worked for a spy organization, lives in a South London housing estate and seems headed for a life behind bars. However, dapper agent Harry Hart (Colin Firth) recognizes potential in the youth and recruits him to be a trainee in the secret service. Meanwhile, villainous Richmond Valentine (Samuel L. Jackson) launches a diabolical plan to solve the problem of climate change via a worldwide killing spree.