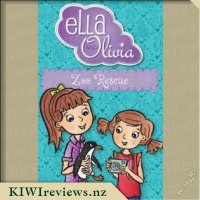 Ella and Olivia are going to the zoo! But when a cheeky penguin gets into mischief, can the girls lend a helping hand?

My daughter is 8 year old and been reading this set of books since she was 6. She loves them and thinks they are awesome she is always checking the books to see which ones she is missing from the set and will read them over and over again. I know she is understanding them as I get the rundown on the books all the time. When Zoo rescue came out for review my daughter was next to me and begged me so she can read and review it.

The book once again has the two girls on the cover which instantly tells you which set this belongs to, it also gives a cheeky picture of who else could be featuring in the story. The writing is nice and big for young readers to read by themselves and the chapters are short enough for them to engage and not get bored of it. My daughter will read 2-3 chapters in 30mins now while she is having reading time, this depends on how many times she needs to come out and tell me about each chapter or talk to her doll about that chapter.

I personally like these books as my daughter loves reading and this makes it easier for her at bedtime to enjoy a story on her own. The stories are always fun loving, and because they are two sisters my daughter likes it as she is one girl with 4 brothers. The book is rereadable as I see her picking it up many times to give it another read and she is getting faster at reading it. At $10 I can't complain for a book that engages a reader, and I have brought them in the pass and will be happy to buy this book aswell for another little girl as a gift.

As spoken about by my daughter (Dakota 8 years)

My daughter is nearly 8 and starting to read a bit for her own enjoyment, but needs a little encouragement sometimes. I discovered Ella and Olivia books a while back and feel they are the perfect series for emerging readers as the text is simple enough, but the book is substantial enough that it feels like a real grown up book and not just another school reader. The stories appeal to my daughter as they are about a couple of girls that she can picture as being around her age and going through issues that she can imagine herself going through.

Although my daughter still prefers me to read to her, I left this book beside her bed and she actually picked it up and read it on her own without any suggestion from me. This to me speaks volumes and shows that the book is inviting enough that she wanted to do that.. It has a cute little picture of a penguin on the front and I like that it isn't too daunting with only 5 chapters, so this all helps it appeal to young girls.

However I will say that MIss 7 said this wasn't her favourite in the series and she did find some bits a bit hard to understand, which isn't usual for her to say about books in this series. Flicking through the book, I can't see exactly why but I wonder if it's the fact that we haven't had much to do with zoos, so perhaps she just doesn't relate to the story as much as she usually would with this series. In summary, the story is about a trip to the zoo where a penguin gets a bit lost and Ella helps to rescue it - a heartwarming story that would appeal to many little girls.

Whilst the re-readability may not be big for this book, at only $10 and with enough substance that my daughter took a few nights to read this, I think it is well worth trying out This may not have been her favourite book in the series, but this may have partly been due to other things going on in her life too, so I definitely recommend giving this book a go.

Joe Fernwright is a pot-healer, a repairer of ceramics, in a drably utilitarian future where such skills have little value. But the Glimmung is offering Joe a way out of his isolated, meaningless life.

It wants him to travel to Plowman's Planet to work on a project there with dozens of other odd creatures. And it may not be a bad idea to do what the Glimmung wants. After all, it is prepared to pay well, it could be divine and, like so many other gods, it has a bad temper...