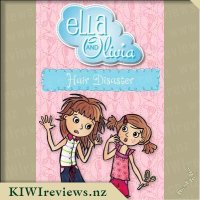 Ella and Olivia are sisters. Ella is seven years old. Olivia is five-and-a-half years old. They live with their mum and dad and little brother Max. Olivia is helping Ella get ready for her ballet concert. But what will Ella do when her new hairstyle turns into a hair disaster!

Includes a set of cute hair clips with every book.

I'd been recommended Ella and Olivia books for a great gateway into chapter books that Miss 6 (almost 7) could read herself, so both my daughter and I were super excited when I was offered this book to review. The great thing about this book is that it comes with a couple of little pink spotty hair clips which gave instant appeal to my daughter who immediately put them in and declared that she could wear them to look like a princess! And I was pleasantly surprised to find the clips do stay in her hair pretty well.

My daughter seems to prefer me to read her books to her at this stage though, and although I'm quite sure she could have read and understood this book, I did read it to her for the purpose of the review. There are 5 chapters in this book and the words are purposely kept fairly simple (except for a few ballet and dance words that she didn't recognise) so it is an easy read but has some substance to it.

My daughter absolutely loved the story - she is a very girly girl and reading about 2 sisters who seem to be into the dance, make up, doing each other's hair and other girly things was right up her ally! I highly recommend these books as a great gateway into chapter books and we'll certainly be seeking out more now I know that MIss 6 is so keen on them. And maybe down the track, she might be keen to read it again herself.

We have had a couple of other Ella and Olivia books to read which the girls have enjoyed but Miss nearly seven especially had to have this one because it came with hair clips. My girls can really relate to Ella and Olivia since they are similar ages and my youngest likes to do everything her big sister does. My girls are not yet at a stage where they can read the book independently so I read it to them in just two sittings.

As the title suggests this is about a hair disaster. The picture on the front cover shows Olivia with a pair of scissors and Ella with messy hair. My girls and I could tell from this what was going to happen. My big fear was that my girls would want to play hairdressers like Ella and Olivia. Needless to say while we were reading the book I reinforced several times that our hairdresser is the only person allowed to cut our hair. I am pleased to say, a week after finishing the book, that we haven't had any hair disasters in our household.

We will be keeping this book along with the other Ella and Olivia ones we have for when the girls can read these themselves. By them reading it again they will have important messages reinforced: Mum's rules are there for a reason; and Mums can help when you are in trouble.

New York cop Eve Dallas returns to face her most ingenious foe--a "secret admirer" who taunts her with letters... and kills without mercy.

An unknown bomber is stalking New York City. He is sending Eve Dallas taunting letters promising to wreak mass terror and destruction among the "corrupt masses." And when his cruel web of deceit and destruction threatens those she cares for most, Eve fights back. It's her city ... it's ... more...