« The Big Block Of Chocolate review 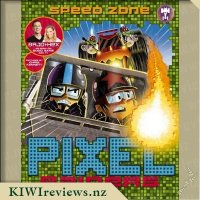 Rip and Mei find themselves driving a real car in a land where race tracks appear from nowhere! Pitched against the evil, cheating Gators, Rip and Mei have to drive to win, because if they don't get the Speed Zone Cup trophy they'll be stuck in the game forever.

Can Rip and Mei race up the leaderboard and win? Or will Megalava's minions, the Gators, take the prize?

This innovative adventure story bridges the visual and storyline concepts from game play to book format. With illustrations by Chris Kennett.

This series is very current in a society where games and technology are a lot more prevalent which is also part of the reason that makes it so appealing to my son. Having played different styles of games himself, it makes the characters and story more relatable and the book is expertly written to emulate a racing game even going so far as the players needing to collect power ups.

The story is fast paced and action packed with a few black and white illustrations throughout. The premise for this book is much the same as the previous two books - beat the game (in this case win the Speed Zone Cup) and our players are one step closer to saving themselves and their friends from being trapped inside the game forever. There are lots of obstacles and bad guys to defeat and an interesting plot twist which we totally didn't see coming.

I would recommend reading the first two books before this one but I don't think it's absolutely necessary. A few of the chapters end in unfortunate cliff hangers which had my son begging for more and made the book very hard to put down. Since finishing the book my son has been reading it again and again on his own so it's definitely a winner. We can't wait for the next book in the series. Mr Seven and I have both read the previous two books in this series, but we agreed that this one is the best yet. Neither of us could put it down. It is fast paced, just like a shoot-'em-up computer game where you have to dodge enemies, collect power-ups, and bounce back from oblivion having possibly lost "lives" (but never permanently!) The heroes, Mei and Rip, have their biggest challenge yet as they steer their vehicle to the finish line so that they can win the Speed Zone Cup and return to the real world.

Although it is useful to have read the first two books in the series, it is not essential - there is a two-page recap at the start, and once the story gets going, the odd reference to previous events appears quite naturally as part of the plot.

The unlikely situation and impossibly pressured pace of the story gains credibility as you immerse yourself into the action. Mr Seven was horrified when told to stop reading and wash his hands for dinner - he insisted I hold the book so he could return to help Mei and Rip through the volcano (kind of like hitting the pause button, but in real life!) This reminded me that it is important to ensure that children have the time and space to enjoy what they are reading; some kids have high levels of concentration and can really lose themselves in a good yarn.

Once again, there were opportunities for discussion and extension. When he was introduced to the TX-5483 External Refraction Disassociator, he put the book down so we could unpack the words. It turned out that they were just fancy terms for a laser - but Mr Seven now knows what "refraction" and "disassociation" mean, words which would not normally be part of a seven-year-old's vocabulary, even if he is an avid reader. This is the best kind of learning, the sort that occurs naturally as part of a fun activity.

We both liked the way that the landscape and equipment of conquered levels dissolved back into pixels just as they do in many computer games. The illustrations are also reminiscent of many gaming scenarios, although it is a pity some of them could not be in colour as it would add to the digital effect. However, it would also increase the cost of the book so that might outweigh the benefits.

Mr Seven and I can't wait for the fourth book in this series so we can follow Mei and Rip as they negotiate the next level. I am not sure which of us is more eager!