ProdID: 5383 - Piece of my heart
Written by Peter Robinson 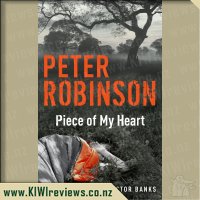 Piece of my heart product reviews

As volunteers clean up after a huge outdoor rock concert in Yorkshire in 1969, they discover the body of a young woman wrapped in a sleeping bag. She has been brutally murdered. The detective assigned to the case, Stanley Chadwick, is a hard-headed, strait-laced veteran of the Second World War. He could not have less in common with - or less regard for - young, disrespectful, long-haired hippies, smoking marijuana and listening to the pulsing sounds of rock and roll.

But he has a murder to solve, and it looks as if the victim was somehow associated with the up-and-coming psychedelic pastoral band the Mad Hatters. In the present, Inspector Alan Banks is investigating the murder of a freelance music journalist who was working on a feature about the Mad Hatters for MOJO magazine. This is not the first time that the Mad Hatters, now aging rock superstars, have been brushed by tragedy. Banks finds he has to delve into the past to find out exactly what hornets' nest the journalist inadvertently stirred up.

Cuzzie and Bro - The Story of Twin Piglets
Rating: 9.0

Tortall and Other Lands
Rating: 9.3

How are two murders connected, and if they are how? Some of the story was easily given away by the way it is written, I personally think it would have been better for the first part of the story to be about the original murder and the following investigation and to be followed by the new murder and investigation.

There are flashbacks to the past and investigation that was supposed to be solved but recent events raise questions about the original investigation and whether or not the correct person was charged and convicted. It is made harder by the fact that some of the main characters have died and those who are left were too drunk or stoned at the time of the original murder to be of much use now.

The characters are well written, from the copper who is only trying to protect his daughter at all costs, to the band members who have various personalities and opinions and some might have something to hide. I found that I couldn't put the book down so it made for a very late night lucky I read rather fast.

I see that it is part of a series so I might have to see if I can find the rest of the books and have a read, really like a good crime story even if it is all fiction.

After Andy and Dylan are caught in a fiery explosion, Zander, Yasmin, JJ, Isabel and Mila realise their only chance to stop the next attack is to get one step ahead of The Signmaker.

But the evil mastermind is far from their ... more...