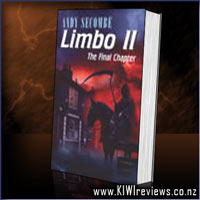 A second novel of humorous fantasy by the author of Limbo. It seems as if not all copies of 'The Book of Destiny' have been destroyed, and one of its prophecies - that of the appearance of The Four Horsemen of the Apocolypse - has become true. The Horsemen have arrived on their different coloured horses: one Black, one White, one Pale and one Pink, and are searching for Rex Boggs - Wizard of Limbo - who prevented their arrival on Hove seafront by rewriting the future.

Meanwhile, on a small island in the Great Barrier Reef, Nilbert Plymstock - maverick genetecist - is searching for a way to save the dying reef by tampering with the corals' DNA. What his research leads to is the development of a biological computer whose processsing power is off the scale.

Back in Limbo, Queen Iris Boggs is bored with her regal life and goes back to Lancing to work in her old newsagent's shop. Unfortunately, she is apprehended by the Four Horsemen and held hostage. Things get even more complicated when Nilbert's computer comes up with a formula for predicting the future, and the Horsemen become hell-bent on opening Pandora's Box - hidden deep in the middle of Dartmoor.

Superbot and the Terrible Toy Destroyer

I didnt get a chance to read the first book but that wasnt a problem since this book quite happily stands alone. On the few times it refers back to something in the first story, it explains itself really well meaning you dont get lost because you dont have the prelude in your head. This is a sign of a really good book to me. There is heaps of great humour and much of it is thinking-humour which is really appealing to me. Andy Secombe reads similar to Piers Anthony, in that he takes metaphorical phrases and treats them quite literally. In the land of Limbo, what you think will happen, will happen, unless you want something else to happen badly enough. I was drawn to the multi-dimensional nature of Limbo and The Void, places outside of space and time, in dimensions humans can barely imagine. It takes the reader out of their lives and shows them a place of dreams made real, where a happy life can be had if eveyone really wants it to. This is all very clearly shown in the last few pages of the book. It's a good light-hearted read, full of everything such a book should have, such as action, adventure, tension, drama, romance and humour. A really good book to have on the cold nights when there's just rubbish on tv.

For hundreds of years the people of Alderston have guarded a terrible secret. When Jamie's family receives a summons to do a mysterious job, they move into a house that looks over the graveyard. Soon Jamie witnesses a series of strange visions and terrible attacks. He begins to suspect that the great iron cages placed on top of the graves are not there to keep robbers out, but to keep the dead in.