All That I Am review 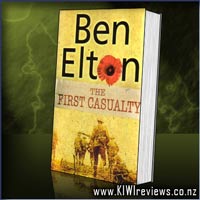 It is Flanders in June 1917: a British officer and celebrated poet, is shot dead, killed not by German fire, but while recuperating from shell shock well behind the lines. A young English soldier is arrested and, although he protests his innocence, charged with his murder.

Douglas Kingsley is a conscientious objector, previously a detective with the London police, now imprisoned for his beliefs. He is released and sent to France in order to secure a conviction. Forced to conduct his investigations amidst the hell of The Third Battle of Ypres, Kingsley soon discovers that both the evidence and the witnesses he needs are quite literally disappearing into the mud that surrounds him.

Ben Elton's tenth novel is a gut-wrenching historical drama which explores some fundamental questions. What is murder? What is justice in the face of unimaginable daily slaughter? And where is the honour in saving a man from the gallows if he is only to be returned to die in a suicidal battle?

As the gap between legally-sanctioned and illegal murder becomes evermore blurred, Kingsley quickly learns that the first casualty when war comes is truth.

The brief I read in one store catalogue says "Ben Elton revisits old Blackadder territory..." and from that, one would expect a comedy. The First Casualty is anything but a comedy. It is a gritty and gripping portrayal of a policeman who is consciencious objector, and ends up being sent to the trenches to investigate a suspicious death.

Elton writes a gripping novel about the reality of trench life, the horrors of trench warefare and the life and attitudes of the soldiers. He seems to have researched his subject well, though a pedant will be able to pick holes in it (as I did in a couple of places), it does not detract from the story. Elton shows the brutal reality of what it would be like to be a soldier on either side during the Great War on 1914-18, and the book is even dedicated to both his grandfathers who served on opposite sides during the Great War - No doubt, Elton had plenty of first hand stories told to him, something I expect he would have drawn on heavily

I found the dialogue of some of the key characters can be a little Blackadder-ish at times, maybe it just showed the blind optimism of the Tommies, and the carefree attitude to life and death in the trenches. Elton writes the attitudes and the dialogue of the officers with some degree of the language of the early part of the century, though like I said, it can be a little blackadderish at times. I could almost picture George and Nurse (from Blackadder IV) holding that boorish dialogue. Not sure if that is the sign of a great writer or my knowledge of a great writer or whether at times he was drawing on his writing of Blackadder for the dialogue. Language aside, he paints a stark picture of the landscape, the weather, the trenches, conditions, the bodies and blood and death; even down to the daily ablutions (at times I felt he spent a little too much time on the toileting habits of the Tommies), and of course, sex.

Elton's book is a great read, it flows quickly and cleanly from each scene and makes for a book that is difficult to put down, and a welcome re-read. I just had minor niggles but those niggles did not put me off from reading it. I still recommend The First Casualty as a great summer read.

This gorgeous board book features colourful illustrations throughout. Die-cut animals peek through the front cover, and small hands can carry this book wherever they go - just by holding on to the rainbow handle!