You Got Served review 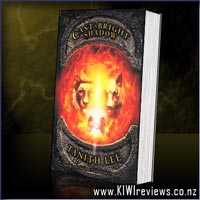 Lionwolf - son to both god and mortal, his destiny must be death or power everlasting.

Born into a world of eternal winter, where once thrived hot climates and exquisite luxury, Saphay, the daughter of a sub-King in the civilized west, is sent off to marry a leader of the barbaric Jafn... not realising that her own father has arranged for her adbuction on this perilous journey.

Escaping her pursuers only to be dragged into the depths of an arctic sea, Saphay is miraculously discovered alive, entombed in an ice pyramid, by her betrothed and their marriage proceeds as intended. However, when it becomes evident that she is already carrying a child, dark suspicions are aroused about the infant's true origin...

Driven out to face death in the icy wilderness, Saphay somehow struggles on until she reaches inwelcoming shelter. There her son can grow up safely in exile, increasingly displaying all the amazing skills of a future hero.

Fission Impossible : Round Two of the Galaxy Game

I Didn't do it for You: How the world betrayed a small African nation
Rating: 9.3

I haven't read many fantasy books before, but what I have read has been poor fare compared to Tanith Lee's works. One of the first fantasy books that really captured me was one of hers, that much I can remember, alas the title of it eludes me.
This book really took me to another world, leaving me quite confused in places, which only added to the feel of the book. It struck me that the story was designed to confuse in places, to give the reader more empathy with the characters, who were themselves in various states of confusion, trying to understand what had happened to them. As they jumped from place to place, living world to that of the dead, to places beyond the imagination of mortals, it left me in mental spins trying to keep track, and I liked that about this book.
With the lead character being a half-god, half-mortal... able to heal any wound, fully grown into a 20+ year old a mere 11 years after his birth, able to ignore gravity and walk on any surface, able to command animals to die, just with a touch... a formidable leader, a stunning foe, a powerful ally... and also a lost little boy seeking closure with a father he knows of but has never met, the Rukar God, Zeth Zezeth.
Without giving it all away, all I can really say now is that this is a gripping start to what looks to be a compelling trilogy. My only worry is that it seems as though this book ended all of the main characters, so I can only wonder what the tie-in to the 2nd book will be, however I look forward to it. If it is anywhere near as good as book 1, it will be a real eye-opener indeed.

Meet New Zealand's beautiful birds, from the friendly fantail to the playful kea and the morepork, wide awake at night. Anne Hunter's delightful rhyming story introduces young readers to a number of New Zealand birds, named in both English and Maori, and beautifully illustrated by Dave Gunson.