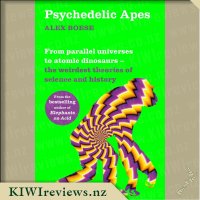 What if the world around us is just a computer simulation? Could the dinosaurs have died in a nuclear war? Did hallucinogenic drugs make us human? What if we've already found extraterrestrial life?

Welcome to the curious scientific subculture of weird theories. Thoroughly bizarre and contrary to the established norm, these ideas are often vehemently rejected by the intellectual community. From the creation of the universe to the evolution of humans, the birth of civilisation right through to our more recent past, Psychedelic Apes explores some of the craziest ideas from science and history and shows that, sometimes, even the weirdest theories may be proved true...

The Chimpanzees of Happy Town
Rating: 10.0

Marvel Guardians of the Galaxy Vol. 2: The Novel
Rating: 9.3

Go to any bookstore and you can find a wealth of different publications in all sorts of lurid formats - paperbacks with crudely colourful covers, magazines crammed with details on the latest conspiracy theories and wacky cult beliefs, flyers inviting people with nothing better to do to sign up for a course on finding the truth. Couple them with TV series and movies ranging from Twilight Zone to Orphan Black and you could end up dismissing the whole lot as science fiction. "Psychedelic Apes" distances itself from the sensational to examine a range of theories and hypotheses from an academic perspective. As such, it provides a welcome and detailed introduction to the unusual. The word "psychedelic" has just crossed over from the 20th century into the 21st in its broader meaning (mind expanding per se rather than as a result of drug usage)!

I found that the first sentences of the introduction had me intrigued. "This is a book about the weirdest, wackiest and most notorious against the mainstream theories of all time." By the third paragraph, Boese had explained that this was in fact a book about the "history of error", an examination of some of the amazing theories that, although apparently farfetched at the time they were first mooted, have ended up being proven. Other theories are dismissed by Boese as impossible, even nonsensical, but only after investigation and evaluation.

This investigative rigor is what separates this work from the penny-dreadful mainstream of literature that populates those bookstore shelves - and, of late, the internet. Boese's point of view is completely non-partisan; he looks at all sides of the evidence before offering a judgement, and if that evidence is inconclusive, he does not hesitate to say just that. He is quick to state that things can alter as scientific knowledge evolves; new evidence can quickly change the result. One has only to read the prophetic books of Jules Verne to see just how thinking has shifted in a relatively small time period, and how things that could only be imagined have now become part of daily life.

It is useful that the book is divided into a series of articles. I hesitate to call them chapters because they are not sequential; although they do follow a rough timeline, each one is a complete study so can be read as a standalone piece of research. Having said that, I did read through from the beginning but that was only because I did not want to miss anything. I found it fascinating that in the very last paragraph of the book (in the Epilogue) Boese states that the main message of the book was that people should always be curious. That was precisely why the subject of the book fascinated me; I am intensely curious about everything and always have been! I suspect that most people also possess this quality.

This is not a quick read. I found that I needed to allow time to read each article because there was a great deal of "thinking through" needed as part of the process. Several times I would recap and read a paragraph twice or even three times before proceeding. It is not a book for someone wanting a quick skim-read as it just does not work that way. Much detail has been included to ensure that the argument holds water, and this aspect does slow down the understanding. The reward, however, is that the conclusion is authentic. To further support the research, there is a bibliography included which offers extension material. It is ordered by article so that the reader can follow up on a specific topic.

This would not be a complete review if I did not mention the style. Although, as mentioned, it takes some time to read, the prose is well crafted with occasional sidetracks into the realm of humour. Some of the headings are quirky too - "What if Jesus was a mushroom?" (a discussion of John Marco Allegro's theory based on cross-linguistic verbal gymnastics); or "What if our ancestor were a pig-chimp hybrid?" (a post-Darwinian investigation by geneticist Eugene McCarthy of inter-species reproduction). These humorous titles encourage the reader to investigate further!

So - fun, informative, full of interesting possibilities, and a great way to learn lots of useful (and not so useful!) things. Whatever this book may be, it is never dull. It will provide plenty of thought-provoking ideas to discuss with others who have also read it, and will no doubt generate lively debate among friends. Which is exactly what it sets out to do.

Marvel's "Captain America: The Winter Soldier" takes place in the aftermath of "Marvel's The Avengers" as Steve Rogers teams up with Natasha Romanoff, a.k.a. Black Widow, to battle a powerful yet shadowy enemy in present-day Washington, D.C.