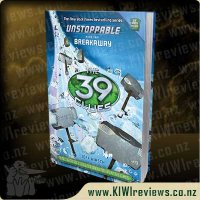 As a member of the most powerful family history has ever known, thirteen-year-old Dan Cahill has been shot at, kidnapped and even thrown into a pit with a deadly snake. He's survived due to his luck, smarts, and his older sister, Amy, who always sticks by his side.'

Now Dan and Amy are facing their greatest threat, an enemy who has found a way to use the source of the Cahill family power against them. To stop him, Dan and Amy must set out on a desperate mission that will take them from one of the world's hottest regions all the way to the frozen blast of the Arctic Circle. But with the enemy closing in, Dan find himself facing the one terror he never imagined... being betrayed by his own sister.

Think of a Link - Remember Absolutely Everything
Rating: 10.0

Since reading the first book in this new series, I have been left in suspense for the next book, and now it has finally arrived! I loved reading this book, the series has developed majorly since the first book of the 39 clues franchise, and this book is good proof of that. Amy and Dan used to be funny and incredibly adventurous people, but both the hunt for the clues, the Vespers, and the loss of lives that came with them have taken a great toll on them, Amy especially since the death of her boyfriend.

The level of detail in this story was astounding, I could perfectly imagine the environments the characters where in, and that could be both amazing and terrifying, which was a ride to remember. The book was also well written, the story flowed smoothly, and the plot was good, and shows just how much things are falling apart between Dan and Amy. I think the cover design was good, though I'm not sure how vikings or Thor factor into the plot. Overall I think that the storyline was quite good, and I'm glad that the only lost lives were those of the enemy.

The game episode was highly enjoyable, my favourite puzzle was the hacker word-find, where words could be written horizontal, vertical, diagonal, and even backwards, and the text character were all scrambled, but could still look like regular letters, you just had to look harder. The game episode was a fun adventure, and I highly recommend that you buy the book so you can check it out as well! The price is great, falls right into the Goldilocks zone. I will be happy to read this book again if ever the mood strikes me, and overall I would call this book one to check out!

The most important scientific discovery of all time, and why you need to know about it.

Everybody has heard of the Big Bang theory, but how many of us can actually claim to understand it? Why do cosmologists believe the Big Bang to be an accurate description of the origin of the universe? Who were the scientists who fought to bring acceptance to this unorthodox theory? And what, exactly, does the Big Bang really ... more...