Dawn of the Planet of the Apes review 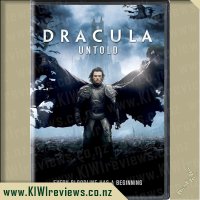 In 15th-century Transylvania, Vlad III (Luke Evans), prince of Wallachia, is known as a just ruler. With his beloved wife, Mirena (Sarah Gadon), Vlad has brokered a prolonged period of peace and ensured that his people are protected, especially from the Ottoman Empire. However, when Sultan Mehmed II (Dominic Cooper) demands 1,000 of the country's boys, including Vlad's son, for his army, Vlad makes a deal with a monster that will enable him to defeat the Turks -- but cost him his humanity.

From the title alone I was not excited to watch this movie. Another vampire movie explaining why dracula became the killer he is famed for. I was so pleasantly surprised with how much I enjoyed it and visually this has to be one of the best vampire movies I have ever seen. I still don't fully understand why the beast just didn't do the killing for him but then I guess its all part of the big game.

I loved the 'change' from man to beast, well in this case bats. It is so well done. The death scenes at the end with the sun, the flight of the bats, vampires changing it was faultless. The story was as I suspected not that fantastic but hey I could quite happily sit there and just watch it on mute and forwards up to the exciting parts. I found the whole 'reasoning' behind the change extremely silly. As a mother I do understand it but as a viewer watching it, it drove me crazy and was just emotional dribble.

The acting was great, the script was getting there but never reached its full potential but you really can not do a lot with dracula that has not already been done. I did like it was not the usual story and it had its differences but I still would of liked more that would it gave. Movies are just getting so much better with their special effects its just a pity that the plots don't.

I'd seen the trailer for this and knew it would be the type of movie my husband would be interested in and could be entertaining for myself. I'm of mixed feelings about wether or not I enjoyed the movie though I think it can be safe to say that I wouldn't be in much of a rush to watch it again anytime soon. We're given a short history to what has led Vlad to this point in his life, which is well done but I expected the son to play a bigger role other than 'that which must be protected' due to him narrating the history. There were also a few big unanswered questions for me such as why exactly the vampire was confined, needed Vlad to fall etc. and then the ending just, I dunno, it was nice but at the same time why end it that way... I can see it leaves it open for a sequel but if the sequel never happens then it's a crap ending.

The special effects are really well done, from the different style at the beginning, of filming, to the rushing into the crowds this is really well done. The vampires and mode of attack was pretty awesome to see and even had my husband putting down his tablet for a little while, which is a pretty big thing.

The soundtrack to this suited it well and it does give a good back story to the famed Vlad aka. Dracula and what exactly could bring a man to that point of desparation.

This film does have a lot going for it but I felt that there were also a few things that could have been done better, as such, I was left neither thrilled nor feeling let down.

Luke Evans is one of those actors who is quickly entering my list of top actors; a list that includes such legends as Jason Statham, Morgan Freeman, Denzel Washington, and Hugh Jackman. Clearly this is evidence enough that I love a strong narrative with convincing action scenes. Dracula Untold does very well to cover both of these aspects, in my opinion.

Starting off with a well illustrated history into the Ottoman Empire's armed forces and the Janissary project, This provides an origin story for Dracula that looks beyond a random unfortunate victim. We have a story of hostage taking, abuse, and training for murder, and the escape from that. The moral implications of escaping such a regime becomes obvious, and the lead character is left with an unfortunate decision that is effectively a lose-lose situation.

But the character has ethics, he is conflicted, he is flawed, he is massively outnumbered, and he is handicapped. He is a character that I love to watch, and the immense scale of what he must overcome makes it enthralling. In fact the outnumbering makes it far more interesting to watch as you realise that the powers he will receive must be extraordinary. And the battle scenes were a joy to watch.

I was impressed by the "realism" of the film. There was friction, and fear from both sides, it wasn't a whitewash, and it could have really gone either way. That really does tell you of how well written, and acted, that this film was. Everyone knows how the film will end for the protagonist. But how he gets to that point is unknown. At what point will he break? It keeps you glued to the screen.

The latter end of the film did let me down a little bit though. It felt rather anticlimactic. And while I was reasonably happy with the results, I wasn't entirely convinced that it was all justified. But that was only perhaps 5-10 minutes of the movie, so not the most significant aspect.

The environments are varied, but there is a rather subtle change in saturation throughout the film, as the colours washout towards the black and whites. It gives it a vintage feel, that also highlights the battle between the dark and the light. The key question for me is, will there be a sequel? I would very much be ready to get in line for that.

Led by young officer Stanhope, whose mental health is rapidly disintegrating, a group of British soldiers await their fate in an Aisne dugout during the end of World War I.