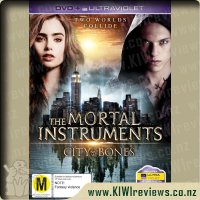 A seemingly ordinary teenager, Clary Fray, discovers she is the descendant of a line of shadowhunters, a secret cadre of young half-angel warriors locked in an ancient battle to protect our world from demons.

After the disappearance of her mother, Clary must join forces with a group of Shadowhunters, who introduce her to a dangerous alternate New York called Downworld, filled with demons, warlocks, vampires, werewolves and other deadly creatures. This movie was a let-down. It started off with an interesting concept. Some kind of unseen society of supernatural beings, committing murders among the unwary humans. But it went in a completely different direction, bringing in different items, and various unmentioned species that happened to all occur at once. The idea that all of these moments were coinciding was unbelievable.

It was unfortunate. The concept screamed box office hit; the movie adaptation of a female-targeted book series, a large number of supernatural beasts that have already been successfully used in cinema (twilight or underworld anyone?), but the film was far too dark, which made it difficult to watch, and there was far too much going on.

Too many characters that were magically connected in a series of unseemly consequences. It just really didn't appeal. I really wanted to enjoy this movie, so that there would be sequels that I could look forward to, but I had to force myself to finish it; I had lost interest within the first half of the film.

Apparently the star was Phil Collins daughter. My flatmate figured that one out while he was on Wikipedia instead of watching the film. I heard there is meant to be a sequel...I honestly hope there isn't.

This is one of those movies where the trailer got my husbands attention more than it did mine, so when it came up in the DVD review list I was happy to put my hand up since I'd be getting it for free. :P

Clary is an ordinary teenage girl, or so she thinks, who live in New York with her mum. She's been starting to draw a strange symbol everywhere and then one night witness' something that no one else around her can see, throwing her head first into the world of shadow hunters and trying to figure her past out when he mum is kidnapped. What follows is a decently paced movie.

Whilst I didn't find anything amazing the movie was set at a decent pace, no long drawn out pauses, and a good amount of action with nothing taking over the movie too much, so that was well done. The creatures are all believable (though some moments with the werewolves weren't perfect, but they seem to be a tricky creature). The demons are pretty darn neat, and some of the spells are fun, but I like the fact that the movie doesn't rely upon the shadow hunters magic to get a good story.

The acting is well done and they all do a good job, I like Lily Collins in this movie far more than I have in her last movie. I really like that though there is a bit of romance, it doesn't really take centre stage, and also the fact that just because she's got these awesome new abilities etc. Clary's attitude and was of dressing doesn't change.

This was a fun movie and should they make any more in the series I will happily watched them.

"Bad Santa" is the story of two conmen who go on a road trip to malls dressed as Santa and his elf.

Rather than spreading good cheer, the duo's motive is to rob each establishment, a strategy that becomes complicated when they encounter an 8-year-old who teaches them the true meaning of Christmas.