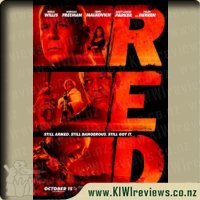 Frank (Bruce Willis) is retired, bored and lonely living off his government pension in a nondescript suburb in an equally nondescript house. The only joy in Frank's life are his calls to the government pension processing centre when he gets to talk to his case worker Sarah (Mary-Louis Parker). Sarah is as bored and lonely as Frank and marks her conversations with the unknown Frank and her spy novels as the only things fun in her life.

When something in Frank's past forces Frank back into his old line of work and puts an unwitting Sarah in the middle of the intrigue, Frank and Sarah begin a journey into Frank's past and the people he used to work with. Like Frank they are all RED ... Retired Extremely Dangerous.

Ever wondered what it would be like if they had to pull John McClane (from Diehard) out of retirement, and unravel governmental espionage? Well this is effectively that movie. Bruce Willis plays Frank, a lonely ex-black ops CIA agent, who as older people do, calls call centres purely to be able to talk with someone. After narrowly escaping a night assault on his home, he has to save everyone, including the girl from the call centre.

RED is quite a well done film, that uses both comedy and action to create a thrilling movie that keeps you engaged almost the entire way through. With a star-studded cast including such names as Morgan Freeman, Helen Mirren, and John Malkovich, this team of ex-agents fight for their lives and provide witty remarks all the way along.

The plot is suitably thick, with plot twists and the cast jumping from one side of the fence to the other, between good and bad, constantly in battle with someone somewhere. The special effects are well done, with quite a believable story line. After I saw this movie, I went out and bought the DVD as soon as it was available. That is the quality of this film.

RED (Retired and Extremely Dangerous), is about a bored and lonely ex-CIA agent who suddenly ends up on the run when he finds out that a call for his death has been placed.

We end up following Frank as he recruits his former team, after all, if you're after one you're after them all, and drags along a woman he's fallen in love with over the phone (since there's phone taps and all that). What follows are some funny moments with the 'girlfriend' as she tries to come to terms with what she's been dragged into, we have the paranoid team mate, the kick-ass, the dying and the russian, all together they make a good team though, despite having not worked together for a few years.

The jokes are funny and there are plenty to laugh at, particularly at Boggs' expense. The special effects comprise mainly of gun fights, and they certainly use a range of weapons, including someone on the bad side using a rocket launcher, which in this movie goes up against a simple handgun and looses. Everyone does a great job but I have to say that I liked Helen Mirrens' performance the most out of everything in the film. When I heard there was to be a sequel I was very excited.

This is a really fun movie, and if you like any of the actors in RED then it is worth the watch.

Robert Louis Stevenson's classic pirate tale takes on a life of its own in the hands of the hilarious Muppets!

Muppet Treasure Island is the fun-packed, music-filled, high-seas swashbuckler the entire family will enjoy over and over.

It all begins when young Jim Hawkins inherits a long-lost map to pirate's treasure. Jim hires the great ship Hispaniola where he meets good Captain Smollett (Kermit the Frog) and ... more...