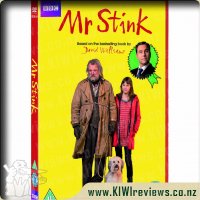 But before she knows it, Chloe has an unusual friend hiding in her garden shed when it looks like Mr Stink and his dog Duchess, might be driven out of town. As Chloe struggles to make sure no one sniffs out Mr Stink, she also has to cope with an overbearing mum, her put-upon dad who has a secret of his own, her "perfect" younger sister Annabelle and the nasty girls who make her life miserable at school.

And it turns out that there is more to Mr Stink than meets the eye..or nose

I sat down and watched this the other day, just as a quiet wind down from a busy day out and about with the kids. My kids weren't all that fussed with watching this, so they mainly just played in the room while I watched it. I think they were just a little too young to appreciate the story, but I think once they are closer to 9 years old they would like it.

Aside from the kids, I enjoyed watching this. I am a British comedy geek, and an avid watcher of QI and other thing. This meant that there were actors in here of interest to me. I couldn't quite place a couple of the people, but when I looked them up they have been in lots of things I watch. But Johnny Vegas plays the Dad, and he has been in QI amongst other things. The Prime Minister is played by David Walliams who did Little Britain. So great cast in my opinion.

The storyline is cute, and family friendly. A magical homeless man is befriended by a lonely child. Together they see the world for what it really is, and have a great time exposing the silly adults around them. It also gave you pause to think about the homeless and what could be done to help them. The ending was like a little hug. This movie is only an hour or so long, so an easy watch. I'll be watching it again.

When I saw the title up for reviewing it seemed very interesting, after getting it noticed it was based on a book but as I don't tend to read a lot of books I have never heard of it before until now. The cover is just simple nice yellow background with a guy, young lady and a dog, nice and simple not overwhelming and you kinda get the idea that the movie is about those on the cover which helped me follow the movie, not that it was that hard to follow.

The start is very interesting as it starts off as a cartoon kinda drawing of houses etc and fades into the actual movie with real houses. I got the feeling of the movie as Chloe seemed like a sad child but as the movie goes on she was just different, a scream for attention I guess in a way. Her sister little miss perfect seemed to be the favourite daughter of the mother and dad is hiding his own secret.

This movie was fun and easy to follow it flowed well, with Chloe and Mr Stink taking command of the set. It was very interesting, best to watch it and not go and do something else like I did, I watched it 3 times and each time I learnt something new about the movie on what I missed last time. There is a secret about Mr Stink but you will have to watch it to find out what. Overall it's a good family movie, and its easy to watch over again. If only people were like this young lady Chloe it would be a nice place now wouldn't it?