ProdID: 5924 - The Impossible Quest #2: Wolves of the Witchwood
Written by: Kate Forsyth 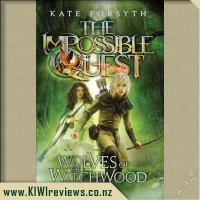 The Impossible Quest #2: Wolves of the Witchwood product reviews

Wolfhaven Castle is attacked, and only four people escape capture... Tom, trained to scrub pots, not fight; Elanor, the Lord's daughter; Sebastian, a knight in training; and Quinn, the witch's apprentice.

Somehow, if they are to save their people, these unlikely heroes must find four magical beasts from legend. But first, they have to make it out of the castle alive...

I asked for this book as I had read the first book and thought that this could be a good series to read and I'm glad I did as the story moved along and the special characters and strengths and gifts are slowly revealed. I find that the characters are well written, they are just kids and have to rely on each other but they don't always like each other and the clues are given to them in cryptic puzzles. I'm not sure that I really like the bog men as they just seem to have super powers but that is explained a bit and I know I don't like the bad guys. You can't always tell who the heros are and what is going to happen next but the battles are short so you don't really lose interest in the story.

I would have read this in one day but the kids kept needing things, the book wasn't extra ordinarily long the way a lot of sequel books are, and the story was flowing. I'm eagerly waiting for the third book to become available as I really want to see what happens next.

It is great to see that there are some authors that aren't scared of using a cliff hanger for an ending so that you will want to see how the kids escape and what damage is done. I know this is going to be a series I'm going to enjoy reading to my boys when they are a bit older, they already love to imagine all sorts of things and often pretend that they are the characters in the movies and things they have seen and I strongly believe that reading is a great way to use your imagination and get lost in the world of the book.

Okay, the first book was not that great in my opinion, but this one was far better. The major thing I tend to dislike about the first book in a series is that it is often quite boring, as it sets up the starting field of the story, in chess terms, it is almost entirely the opening moves. The sequel of that first book, however, has managed to impress me enough to want to stick with the series. The story was a bit more epic, and reveals more about the underlying story, and in the second book, a faster rate of reveal can be expected of such a short series.

One thing I did hate was there was a lot of waiting in the story, but the action lacking in those areas tended to be moved inside the escape scenes. Since it has been a while in real life since the previous book, and quite a bit of time relative to the start of the story in terms of the character's perception of time, I feel like the characters have already developed quite a bit since the start, and this evolution makes me a bit excited about the series, which provides another incentive to keep reading through the series. The level of detail in the story was good, it had not plot-holes or twists which would have ruined it.

While the story was detailed, some of the scenarios in it were handled a little too simply, there were too many Deus ex Machina situations, in which some exterior force would drive away the danger, but I always prefer situations that are solved through innovation, not blind chance or luck. Another thing I liked about the story was that the legendary creature the young heroes were trying to find was a Griffin, and they are a type of creature I have enjoyed reading about for quite some time, heck, one contributing factor of that is with us developing gene splicing techniques, one day we might be able to CREATE our own griffins, so this really helped me to enjoy the book

Okay, now to cap things off, I just want to say that this series is doing good so far, and I really loved how the book ended on a cliffhanger this time, so I am looking forward to the next book. Bye!

Score: 9.4
Product reviews for listing 431: Rock Around the Kitchen -  Written/Developed by Peter Chaplin and Mary Cox

ROCK AROUND THE KITCHEN combines Peter's distinctive flair with vegetarian
cuisine with Mary's expertise in health and wellness therapies.

Over the last 20 years New Zealand has experienced a significant change in culture when it comes to food. With access to a wide variety of foods from all over the world, New ... more...