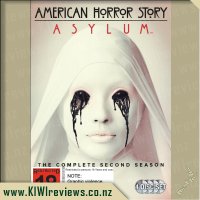 A frightening seasonal anthology series, each season is a self-contained miniseries - following a different set of characters and settings.

In the second installment of the award winning psycho-sexual horror series, explore sanity and real-life horrors in the macabre Briarcliff insane asylum. Set in 1964, American Horror Story - Asylum takes viewers into a Church-run haven for the criminally insane, ruled with an iron fist by Sister Jude (Jessica Lange), a nun with a troubled past.

This grisly tale begins in present day when Leo and Teresa, the unsuspecting newlyweds, choose to spend their honeymoon within the safe haven of a now abandoned asylum. Or is it... once inside, the pair is thrust into a gruesome fight for their lives as the story fl ashes back to 1964. Originally a tuberculosis ward, Briarcliff Manor, western Massachusetts, was brought by the Catholic Church and transformed into a chilling insane asylum. Monsignor Timothy O'Hara (Joseph Fiennes) and the formidable Sister Jude (Jessica Lange) are in charge with the help of Sister Eunice (Lily Rabe).

Includes all 13 episodes from series 2.

I was a little disappointed and confused when this first started. I kept expecting the first episodes story to come into play and had no idea that this was a completely new story with completely new characters. Although this was enjoyable it was not as good as the first one. It jumped around a lot from present day to the past and got a tad confusing at times.

The characters though again where top notch and the casting is fantastic especially Jessica Lange. The story, although good just was not as gripping as I would of liked. It is about a mental asylum where the characters where either starve barking mad or they were sane and locked up for the wrong reasons. It had a more 'horror' feel to it then the first seasons one. I think the worst part was knowing these poor souls were so vulnerable to the highter powers and had no self diginity. The mad doctor doing experiements on the patients or the supposed aliens it all got a little weird

It did not hold my attention as much as the first one and my husband walked out on it after the second episode. It was more of a silly scare factory then a real story. Still had its moments and like I said the acting was fantastic especially when the Sister got possesed by the Demon.

When we heard that there was going to be a season two of American Horror Story we had to question how considering the end of the first season but as we find out, there may be the same actors but the setting and the characters are 100% different to the first season.

We start off with a newlywed couple (Adam Levine is one of the two) who are exploring a now decrepit and run down old mental asylum, while this happens we flashback to the asylum in its heyday. Here we meet a man committed for murdering his wife (though the series hints at something more than that), a woman also committed for murder and then there is Lana, a journalist who is committed after prying into the rumors of patient mistreatment.

Once again we have some very twisted characters throughout the series, the characters are well played and there is a total eerie vibe to the entire season. While I didn't enjoy it as much as the first season, it was still a psychotic show with some very twisted and strange stuff going on, even a musical number (told you it's a strange show). They overall story line was really good, even though I didn't enjoy it as much as season one.

A must watch and can't wait for the next.

Chosen by Her Majesty The Queen to sing at the Investiture of His Royal Highness as Prince of Wales, at Caernarfon Castle.

Conducted by Eirian Owen and featuring presentations by the whole of the The Aran Mountain Male-Voice Choir, as well as trio acts by Tom Evans, ... more...