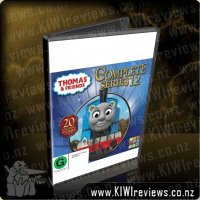 See Thomas and his Friends return in Series 12 with all new animated effects. Now for the first time ever all 20 episodes of these thrilling railway adventures are available on one DVD!

Join Thomas and his friends for carnivals, surprise parties, heroes and hot air balloons. Thomas learns that no special job is more important than friendship and there are 'Peeps' and whistles a plenty!

Well there is a lot of screen time on this DVD. 200 minutes to be exact. 20 episodes.

Thomas and the Billboard, Steady Eddie , Rosie's Funfair Special, Mountain Marvel, Henry gets it Wrong, Heave Ho Thomas, Toby's Special Surprise, Excellent Emily, The Party Surprise, Saved You!, Duncan and the Hot Air Balloon, James Works it Out, Tram Trouble, Don't go Back, Gordon takes a Shortcut, The Man in the Hills, Thomas puts the Brakes on, Percy and the Bandstand, Push Me Pull You and Best Friends.

Each episode begins exactly the same with the Thomas song and introduction to Sodor. Then the story for the episode and then each episode ends with the Thomas Song being sung and the words so you can sing along. Once you have listened to the theme song twice each episode for twenty episodes you won't be able to get it out of you head!

This was released in 2012 and shows with its animation. Wow! Animation has come a long way and these trains and their surrounds look real! Visually it is amazing to watch. How do they do it?

The last Thomas DVD's I watched were narrated by Ringo Starr, (so obviously I am a bit blown away by the quality of this DVD!). These episodes are narrated by Michael Angelis.

So superficially these episodes are great and will keep your little one entertained literally for hours with the exploits of Thomas and his Friends. On a deeper level though I was a bit concerned at the messages that Thomas and his Friends might be sending impressionable little brains.
The majority of episodes seem to be about one of the trains ignoring the instructions given to them by either the thin controller Mr. Percival or the Fat Controller Mr Topp and taking it upon themselves to do something that they decide to do. When they are caught out there is little, if any apology and it all works out in the end. Sodor is almost an Island with no consequences where no matter what your actions are all will be forgiven and turn out okay even if you don't even say sorry or talk it through....!

Not sure if that is too deep but it did feel a bit watching these that the spirit of Sodor has been lost a little and there hasn't been too much thought put into the stories for these new episodes. I could hardly say that watching an episode of this would teach your child the meaning of anything more than you can be disobedient and it will all work out in the end. I would have liked to have seen a bit more thought put into these stories as this DVD is aimed at a very young and very impressionable audience and it would have been a good opportunity to script some very good stories upholding some core values.

Everyone's favourite postie is back with a brand new series and an even more challenging set of deliveries. When a naughty sheep escapes and is causing havoc, can Pat catch him and get him safely back to Amy? A swarm of bees has buzzed out of their hive and is on the hunt for pollen, there are flowers ALL over Greendale! Pat needs to find a way to tempt the bees back into their hive as quickly as possible. Whatever it is Pat is always there to get the job done.