« Charles Darwin and the Tree of Life review 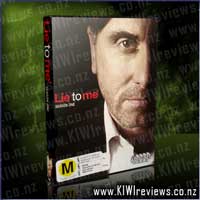 Lie to Me : Season 1 product reviews

*The Truth is written all over our faces.

In this powerful and engaging new crime drama from the producers of 24, Tim Roth stars as Dr. Cal Lightman, a deception expert whose uncanny ability to read facial expressions and body language makes him a virtual human polygraph.

Joined by psychologist Dr. Gillian Foster, Lightman tackles compelling cases of sabotage, scandal and murder, always uncovering the one thing that matters the most - the truth.

Oh my, I love Lie to Me! This is one of the best shows I have seen in ages. Okay, I'm a bit of a sucker for crime shows, and I love it when there is a twist. Basically I love that "weirdly charismatic, ultra smart and attractive" guy working with the police to solve crime genre. You know what I'm talking about. Mentalist, Castle, Lie to Me. They are all awesome.

Lie to Me has great story lines. The main character Cal is such a mystery. I love that we are feed little bits about his past, his family, and friends all the way through. Almost every episode ends with a new mystery. But it doesn't get tiring or boring like Lost did.

The actors in this are amazing. The scripting is genius, though I do get excited about clever turns of phrase. The facial recognition stuff is so fun, trying to guess who is telling the truth by what twitches you see. I totally recommend this show.

Entertaining, thrilling, informative, educational... Dr. Lightman does for crime what Dr. House does for medicine... he'll pick away at the clues and signs until he's gotten down to the root cause... then do something about it.

I must say, though I caught the first episode on TV and found myself liking it a lot, other matters prevented me from seeing the next 4 episodes... I have a policy: If I miss three in a row I don't bother after that. I have found the plot tends to fragment too much. Thus, I was extremely happy to have a chance to see this series in full. This series not only enthralled me, in a similar manner to CSI or NCIS, but also taught me a lot about human nature and how we communicate more with non-verbal signals than with mere words.

I have been a fan of Tim Roth since I saw him in Rosencrantz & Guildenstern Are Dead, and have seen much of his stuff in the years since, however I have never seen him in a role quite like this... and I must say he does it brilliantly. As the distracted savant, he's as shockingly original as Hugh Laurie is in House. Dr. Lightman is an amazing character, with powers of observation that is almost supernatural. He can read your mind by what you broadcast with your body language and facial reactions.

Overall, though there are the usual crimes to solve, situations to deal with, people to study... very much standard crime drama fare... the new twist is something to make it worth watching for even the most jaded of crime drama watchers, and the cast is well picked, which helps a lot! This is great for those who enjoy crime dramas, it's educational for those who can't help but soak up this kind of thing, and as far as I am concerned it's an all-round winner in my book.

Starring Jon Pertwee as the Third Doctor and Katy Manning as Jo Grant, Doctor Who: Colony in Space.

All episodes are newly re-mastered, utilising advances in technology and technique, and are supported by a fantastic collection of bonus features.
The Time Lords discover that the Master has stolen secret files revealing the location ... more...