« Me and Earl and the Dying Girl review 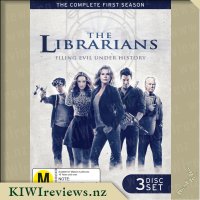 FLynn Carsen may appear to be an ordinary librarian working at the world-famous Ney York Metropolitan Library, but beneath the public library lies the centuries-old headquarters of scholars and adventurers who investigate the bizzare, collect dangerous artefacts and save the world from supernatural threats.

When an ancient conspiracy threatens to destroy technology and bring back the age of magic, Flynn must recruit four extraordinary people to join in the quest. If these new recruits fail, the world will be plunged into a new dark age. But if the succeed, the will become the new Librarians.

Do you like adventure, do enjoy films similar to Indiana Jones, like magic, mystery and myths and legends...? When I saw the ads for this TV series I was thrilled, I really enjoyed the three straight to TV films in the Libraran series starring Noah Wyle and couldn't wait to see this series. At first I was a little dissapointed, as Flynn is my favorite character but in only in four out of the ten episodes, but once I got to know the characters a bit more this wasn't as big a loss, though I would love to see more of him.

The Librarians focuses on three people who once attempted to get the role Flynn now has and have now been thrust into this world of magic and mystery, on their side they have a guardian (who's sole purpose is to keep them alive) and Jenkins, who looks after what is left of the library when they are gone. They each have a pretty typical personality for the character that they portray but they each do it well and aren't so typical as to be boring and what I really do love is that in the main team, it's equal male vs female, there's one main bad female and male and all of them can kick butt or solve problems.

I am a person who loves seeing different takes on myths, legends and tales of old, so this was perfect. We have Excalibur (who's full of personality), a minotaur, Santa, dragons, fairy tale characters, witches, a haunted house, Tesla and back to talks of King Arthur and those of the tales. Watching them, I wasn't bored with any of the episodes, they were a lot of fun and in their own way unique. The series is rated M (supernatural themes and violence) but there's no real blood and gore, nothing really nasty or gruesome so I'm happily rewatching this with my kids.

I did a quick google last night and I'm extremely happy to see that they are currently filming series two!!!! I can't wait for it to come out and I can promise you that season one is going to get plenty of use.

Honk your horns - Toot! Toot! - It's the traintastic world of Chuggington where eager engines Wilson, Koko and Brewster are learning to become working trains.

The the three young chuggers, there are always adventures, fun and excitement on the rails as they get into scrapes in a deserted town and the Safari Park, help each other out of trouble, and discover the Repair Shed is not such a scary place after all.