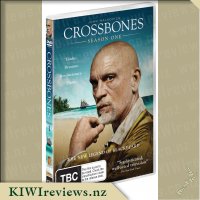 One icon stars as another when Hollywood legend, John Malkovich plays Edward Teach, better known as the barbarous pirate Blackbeard in the NBC series, CROSSBONES.

It is 1729 and on the secret island of Santa Compana, the infamous Blackbeard reigns over a rogue nation of thieves, outlaws and miscreants. Part shantytown, part utopia, part marauder's paradise, this is a place like no other. Blackbeard covets the Longitude Chronometer, an invention that will change the world, and he tasks his most trusted pirates with stealing it. Their attack on a British vessel brings Blackbeard into contact with Tom Lowe (Richard Coyle) and undercover British spy whose mission is not only to protect the chronometer, but, should the opportunity arise, to assassinate Blackbeard.

Filled with extraordinary action, adventure and intrigue; it is a world where one can never sure just how is the hero and who is the villain. The series opens with a battle between the British and some pirates. Instantly, they have my attention. A lot of blood and death, but then it's all gone, and we are on a caribbean island somewhere for the rest of the series. Rather than an adventure drama, I would think it more suited to come straight out and call it a political drama. It would lead to less people being disappointed.

John Malkovich is the main reason why there is an appeal to the series. Well known for his ability to play eclectic, unbalanced, even psychotic characters, John Malkovich playing the malevolent Blackbeard seems like a casting choice made in heaven. But unfortunately he is more of a support role to that of Richard Coyle (who plays Tom Lowe), whose manipulative nature tends more towards condescension, and it makes his character harder to like.

The speed of the series is rather fast, with subplots coming to a quick solution, or rapidly replaced with a larger conundrum. While it helps move the series along, it makes it a little harder to get properly invested in the characters as they appear to have very abrupt changes of heart, and they switch from happy to violent at the drop of a hat.

It is an interesting interpretation of the Blackbeard story, but I found the whole "pirate" theme was downplayed too much for my liking. I wanted to see more pirate battles on the sea, and less bickering and pleading on the land. A great multi-national political story, but if it is action and adventure you are after, it is probably best to look elsewhere.

Dorothy the Dinosaur's Beach Party! is the stompywompy show full of your favourite Wiggly songs that will fill your day with sunshine: Can You (Point Your Fingers & Do the Twist), Having Fun at the Beach and The Monkey Dance will have your flip-flops flapping with fun!

Dorothy and her friends, captain Feathersword (played by Paul Paddick), Wags the Dog, Fairy Clare and Henry the Octopus, are joined by some new friends, ... more...