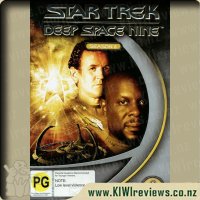 Deep Space Nine's sixth season just gets better, the show tells stories in this season that are both more epic and more personal than ever before, features genuine twists, great acting, of course, as well as some memorable moments.

The season begins with a sensational story arc that picks up where season 5's "A Call to Arms" left off. The arc is perhaps the show's best, and brings about many developments: Nog becoming an officer, Gul Dukat's daughter getting killed and Starfleet retaking the station. The show then gets back into its a great blend of character-based drama and war tales that make this season so good. Character stories are plentiful here and include: Worf and Jadzia tying the knot in, Bashir being reunited with his genetically engineered friends, and Dukat's truly evil nature being exposed (Marc Alaimo is brilliant as the once-proud Military Leader now a schizoid, hallucinating, paranoid man)

There are some real ups and downs in this season. There are a couple of light-hearted episodes but since we are on the flight path to war there aren't too many of those episodes. There is a real tear-jerker of an episode which sees us loosing a long term cast member, I still miss them even now. The lead up to the final season is very well done and leaves you looking forward to all that is left to come. The character growth is really good and you really feel for the characters.

Perhaps the most popular musical of the 1950s, My Fair Lady is a stageshow adaptation of the George Bernard Shaw novel, Pygmalion. The story revolves around Eliza Doolittle, a coarse little peddler of flowers in Covent Garden who agrees to take speech lessons from phonetician Henry Higgins in order to fulfill her dream of working in a flower shop. Eliza succeeds so well, however, that she outgrows her social station and - in a development added ... more...