« What a Girl Wants review 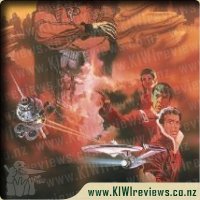 At the end of the universe lies the beginning of vengeance. It is the 23rd century. The Federation Starship U.S.S. Enterprise is on routine training manoeuvres, and Admiral James T. Kirk seems resigned to the fact that this inspection may well be the last space mission of his career.

But Khan is back. Aided by his exiled band of genetic supermen. Khan - brilliant renegade of 20th century Earth - has raided Space Station Regula One, stolen a top secret device called Project Genesis, wrestled control of another Federation starship, and now schemes to set a most deadly trap for his old enemy Kirk... with the threat of a universal Armageddon!

KHAAANNNN! This has to be one of the most immortal lines from all twelve movies and all six series. Wrath of Khan is the second movie from the world that is Star Trek and while it is a stand alone movie there is an episode based on Khan in the original series.

Scientists have created Genesis, a machine that if used properly will take a dead, barren planet and make it a thriving planet covered in plants and eventually wildlife. Things go awry when Khan and his people escape the planet that they were marooned on and attempt to steal Genesis for less than good intentions.

This is one of my top favourite Star Trek movies and one that I have watched so many times that I only need to watch it a couple more times and I will be able to join in with the movie saying the script word for word. It has everything you need, a little bit of comedy, plenty of action, fight scenes both on planet and between ships and a dash of old romance thrown in.

Score: 6.4
Product reviews for listing 5670: Are We Officially Dating? -  Directed by Tom Gormican

When you realise getting some means wanting more.

Zac Efron, Micheal B. Jordan and Miles Teller star in the hilarious comedy about three best friends who are living in a carefree single life in New York City when their best friend (Micheal B. Jordan) learns his wife wants a divorce.

In a show of support, the three long time buddies promise each other that they will avoid commitment at all costs and stay single together, ... more...