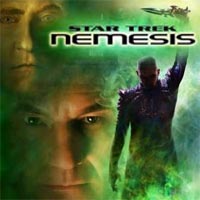 Set a course for a galaxy of unparalleled action and adventure as Captain Jean-Luc Picard (Patrick Stewart) and his crew battle a chilling new adversary... that just happens to hold a shocking link to Picard!

Being a fan of the Star Trek Series and movies, I found this movie to show a more humorous side to Jean-Luc Picard which hasn't really been shown. After that I found it was more like an extended episode rather than a movie.

I loved seeing the new Enterprise the NCC-1701-E, the design was wonderful and an upgrade from the galaxy class NCC-1701-D. The character of Shinzon being Jean-Luc's clone was a little predictable once you saw him for the first time, but apart from that was sad to see Data go up with the ship and the dumb-founded look on Captain Picard's. The look of the Argo buggy wasn't really up to play with the look of the 24th century.

In the end I had mixed feelings about this all the way through, but as for the action of the movie was pretty average, the bridge layout was a little upgraded, the acting of TNG crew was very well done. I can't see myself rushing out to buy it unless it's completing all of the Star Trek Saga. Really left me wanting more and a little disappointed really.

Great for special effects, great for nothing else at all.

I grew up watching Star Trek practically every single day of my childhood thanks to a father who is nutty about Star Trek, and even he ranks this in the bottom 3, first up for elimination please!

Some bits were awful, others not thought out well, holes in it that a starship could fit through with room to spare and some bits were just plain awful.

From a TV series that great, and for their last movie I would have expected far better and I'm sure a few people would have gotten themselves fired over this. With a movie like this it was no wonder people were concerned and sceptical of number 11.

This movie is one I would own, but only so that I would have a full collection, not to watch, ever.

After a brief few minutes thinking Star Trek had finally been made into a comedy, I started to hope that this would turn into a wonderful epic movie, but alas no, it merely got worse, from the lack of gripping plot to the hmmmm I think i've seen this before feeling, this was no Lord of the Rings.

All in all not a movie i'd recommend seeing.

I wasn't overly impressed with this one, being the latest installment in the long and proud lineage of Star Trek movies. Even with all the storylines getting heavily thrashed these days, it was quite disappointing.

Weak in so many places, the plot had little goig for it. A few minour twists kept me off-track in places, but overall it was quite predictable, making for low enjoyment.

About as believable as the series, this had no surprises, so left me cold on the techno-front. Nothing really new or novel in the weapons or tools department. Those replicator units sure do have an impressive library of stuff they churn out with such ease. Scan it, store it, clone it. Seems to be the theme for that 'world'.

However, as per usual, the special effects were right up there. Couldn't spot any glaring glitches, so felt reasonably good about assigning a high score there.

Overall, not really impressed at all.

Set in the 23rd century, Luc Besson's The Fifth Element takes us to a world vastly different from that which we know today.

For ex-Marine Korben Dallas (Bruce Willis), life has become tediously repetitive: he drives a flying cab for a living, and eats take away from the same Chinese restaurant, which delivers directly to his window, every day. But little does Korben know, a great extra-terrestrial Evil has teamed up with Zorg ... more...