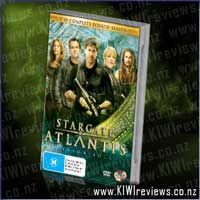 Yup, even after 13 years of this stuff, I still call myself a fan. With the continuity provided by Amanda Tapping, still looking ravishing in the right outfit and still showing off her best asset - her intellect - the storylines are still bearable, though starting to look a little threadbare in places.

After a crushing defeat at the hands of the humans and the lantean Replicators, the Wraith are a minor threat at best but still holding a few aces up their sleeves... aces which the humans must crush or suffer a repeat of fate as food for the ravening hordes to come. Despite this, a few of the Wraith want to ally themselves with the annoyingly inventive and tenacious food-beast humans to somehow cripple and destroy the Replicators before they over run the galaxy and seek venegence upon both races of their creators' decendents.

And so it that we, the viewers, reap the boon of another 14.4 hours of action, intrigue, romance, fear, panic, excitment, annoyance, anger and pride... plus a whole heapin' helpin' of explosions, funky weapons, and nasty humanoid robots shoving fingers into skulls to read minds... -woot!- What a series, eh?!

Overall, still brilliant, despite the tarnish setting in on the sparkling star that is the Stargate franchise. I have to wonder if we will see a 14th year of the universe, being the 5th year of this franchise, since SG1 is long dead in it's grave. I hope so, but have to wonder who the next set of bad guys will be, with the Wraith a mere shadow of their former selves, the Replicators dead, the ascended baddies, the Ori, gone the way of the dinosaurs, and basically everyone gone bar the related human enclaves and a few scattered sub-sentient critters clinging to vines in the treetops.

Who discovered we could get milk from cows, and what did he THINK he was doing at the time?

The legend returns in his 'High Horse Tour'! Connolly's one of the all time greats of stand-up. Without him, modern comedy would look very different indeed.

Ever since his first, iconic appearance on the Parkinson show back in 1975, Billy Connolly has enjoyed an indelible presence in the nation's heart and has ... more...