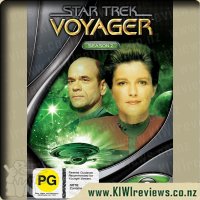 While Voyager continues its journey home through Kazon-infested space, the crew finds themselves having to think like the warlike aliens if they are to survive the year. While a captured Chakotay is urged by a local Maje to kill an ostracised Kazon youth in order to win his freedom, Captain Janeway's attempts to form alliances with some of the ever-changing factions are frustrated by the meddling of the treacherous Seska and her secret conspirator aboard the Starfleet vessel.

Voyager is back for another season trapped in the Delta Quadrant and we (in my opinion) get some of the best episodes in the entire series in this season.

Season two starts off with a fun episode, they find a pick-up truck floating in space and upon investigating find some cryogenically frozen people, including Amelia Earhart and her co pilot Fred Noonan, so now we know where some alien abductees end up

. Another great one is "Twisted" in which the ship is hit by a distortion wave, really messing up with the layout of the vessel and causing widespread panic. We also have Janeway and Chakotay being left on a planet after getting sick, Q returns with two other Q's and Janeway and Paris mutate and have babies (of an alien sort).

The characters are well done, we get to see a bit more about what makes each of them tick and a bit more history. Friendships begin to really form and I know I'm not the only fan out there that wished Janeway and Chakotay would have made better use of their time stranded together. There is still tensions between crew members, not only due to their differing choices but the spy on board, and spies always ruin things.

This has some of my favourite episodes and does a wonderful job of keeping you entertained.

Score: 9.3
Product reviews for listing 1349: In Search of the Trojan War -  Type of Show: Documentary

Tales of Troy and its heroes - Achilles and Hector, Paris and the legendary beauty Helen - have fired the human imagination for 3,000 years. With In Search of the Trojan War, charismatic historian Michael Wood vividly brings to life the legend and lore of the Heroic Age in an archaeological adventure that sifts through the myths and speculation to provide a fresh view of the riches and the reality of ancient Troy.