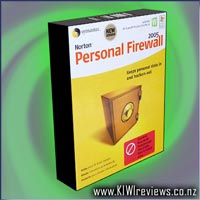 Right out of the box, it makes your PC invisible on the Internet so that hackers can't find it. The program's intelligent intrusion prevention technology blocks suspicious Internet traffic.

Easy-to-use privacy controls prevent personal information from being sent out without your knowledge.

I am not a hacker. Despite starting back in the days when the internet was simply usenet (newsgroups and mailing lists) and SLIP/PPP connections for email, I have never really had much urge to 'reach out and poke around' in someone else's PC. What's the point?!

But in today's hyper-digital world, the byte is big, and the more bytes you can steal, the more power you have over someone. I was shocked as hell when a complete stranger email'd me a couple of holiday snaps of my then-girlfriend and I sunbathing on Taupo's lakefront. Thank fnord we had clothes on at the time!

It woke me up, big time. I became very cyber-security aware, and thus followed a flurry of panic downloads. Firewalls, Counter-Intrusion tools, anti-virus and anti-trojan tools, the whole toolkit really. It took a while to find a complete set of tools that would co-operate without fighting, yet still give me total coverage and a chance to snag the scum trying to break in.

So, with that in mind, I was interested to see the latest offering from consumer protection giants, the Norton's Personal Firewall. I have always been a bit wary of Norton's because 90% of the time my system was so locked up with other tools, I simply couldn't get Norton's stuff to run without crashing. So it was time to build a dedicated testing machine.

Windows XP Home ed, plenty of hard-drive space, heaps of RAM, a network card and modem, and away we went. Install the package, log online to register, then CHARGE! On with the attack!

With an aquaintance hired for the task of hacking in via the net, and me doing the same down the local network, and we simply could not break in with even the most concerted efforts. However, the combined attacks did cause some very nasty system failures in places, leading me to the conclusion that even though the data was safe, the system could still be made unstable from constant prolonged attack.

Since most machines won't be victims of such a concerted attack, after all, why attack a locked-down system when there are plenty of insecure system out there to play with, this really wasn't something most home-joe's will have to worry about. However if you notice a rather nasty attack, I would suggest you rapidly shut down your MSN or other Instant Messaging application, as that will be one of the weakest links.

Overall, quite an impressive, powerful tool. As with all software, the price tag may seem a bit steep, especially with many free tools out there just a download away. However, be aware you WILL get what you pay for... and free can be an even bigger risk, because it's bound to have some serious flaws just waiting to be discovered.

Microsoft Office Professional 2007 is a complete suite of productivity and database software that will help you save time and stay organized. Powerful contact management features help you manage all customer and prospect information in one place. Develop professional marketing materials for print, e-mail, and the Web, and produce effective ... more...